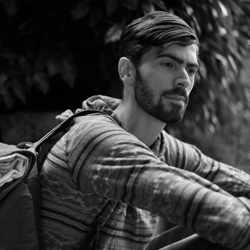 I like travelling. I like storytelling. I also like music. So I expected Daniel Morton’s play, The Traveller, would be just my cup of tea. Regrettably, it was not.

The stage felt cluttered and cramped, restricting actor-musician Max Kashetsky’s movements in this one-man show. The script repeatedly promised deeper meaning – some striking message that would turn my idea of life and travel on its head – but I’m sorry to admit the only message I got out of the experience was simple and cliché: death reaffirms life. Either I really missed something or the play’s script is too inarticulate to express any grander revelation, falling short of what was promised. But to give credit where credit is due, Kashetsky’s narration and music felt smooth and skillful, and the story was deftly delivered, despite the artificial quality of the staging and script.

Kashetsky makes the best of a vague script and takes audiences on a journey propelled by lyric magnificence. Armed with guitar and harmonica he regales audiences with a life-affirming adventure through South America. The imagery described comes to life most vividly with the aid of slow, soulful song and minimal movement across the stage. My favourite bits had Kashetsky seated, standing, or strolling, center stage, on or around a chair centerpiece. The stage’s other two focal set pieces were too close to the simple centerpiece and, as a result, proved distracting. I was further distracted by Kashetsky’s awkward walk through the audience – in The Havana’s narrow space between rows of seats this trip felt unnatural. All this served to highlight for me was the artificiality of the character’s movements and how he – mysteriously revealing himself to audiences solely as “The Traveller” – always returned to the center of the stage. But maybe this is a metanarrative moment encouraging audiences to reflect on the cyclical quality of travel – after all, journeys often end precisely back where they began when you return home.

At best, this play is a reminder to broaden our perspectives, at worst, a cliché. It offers a musical and poetic reflection on events passed, but that exact series of events, although lyrically delivered, is divulged in insufficient detail. It left me disappointingly (almost frustratingly) indifferent to the message but rewarded for the performance. Even if you aren’t moved by The Traveller’s story for its content, you will be moved by the way it’s told