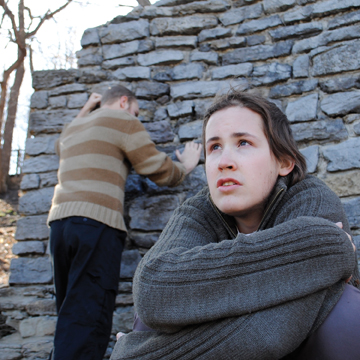 What do you do if you are being tormented by an outside force you cannot understand?

George (Kevin Ray) and Byron (Nic Turcotte) are on a camping trip together when mysterious words start appearing. The mechanism of outdoor projection is not clear, but both George and Byron can see the communications. When the entity is asked why "it" speaks of itself in the third person, it says it is a third person--thus, I will refer to the entity doing the communication as "third person" throughout. The third person is somewhat sadistic, as "it" chronicles real-time updates of everything George and Byron are doing, and periodically switches to providing the supposed true motives and true thoughts of George and Byron, particularly where doing so will lead to serious mistrust between the two young men. As the men get progressively more upset, the third person switches to philosophical mind games. The third person is never kind nor loving, and neither is it completely accurate.

George and Byron do their best to ignore the messages, but eventually cannot bear not to look. The messages cause periodic estrangement between the two friends, as the third person claims to write what each of the characters really thinks, but which he is hiding from the other. The issues of dispute include a possible monster loose in the forest, as both characters hear it, but never see it. Is the third person actually telling the truth when it writes these things, or is it just trying to be malicious?

George and Byron try to figure out how to get on with life with these messages constantly appearing. The temptation to try ever harder to figure out what it all really means is overwhelming. There is a suggestion, in my opinion, of Eve’s desire to know more about the tree of good and evil. What if Byron, who is prone to nightmares where a minotaur chases him, could wake up from life just as he can from his nightmares? After all, in some sense Byron controls his dreams (except he really does not, say Fringe members to themselves, I suspect).

But foreknowledge, as the third person indicates it has,  leads to huge problems with a co-existing belief in personal agency. These contradictions have kept religious people busy for centuries, without a new solution.