Totem Figures: myths to live by 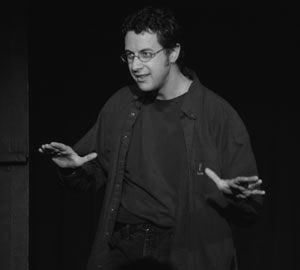 TJ Dawe has become a perennial favorite at the Victoria Fringe Festival, and for good reason. His one man shows shine and spin like a midway ride at a Fall Fair. But since much of his material is autobiographical, and, by his own admission, he's been spending much of his recent life on the Fringe circuit, perhaps it was inevitable that it would come to this: a Fringe show about putting on a Fringe show.

In any case, Dawe's most recent creation is a curious creature indeed. Totem Figures is an examination of the creative process, and an homage to other creative artists and works of art that have influenced Dawe's view of the world. So, not only do we get lots of personal history of the theatrical career of T.J. Dawe, we get biographic notes about his heroes, and mini plot overviews of his favorite books and movies.

Dawe has apparently recently discovered the notion of the "personal mythology", an idea that made its way into pop culture about 15 years ago with the advent of the cult of Joseph Campbell.
For his own "life narrative" Dawe has chosen the archetypes of the outsider and the thief.
This is something that he is obviously very excited about.

Part way through his show Dawe tells us a story about how he discovered that smoking dope has the opposite effect on him that it has on most people. One night, the story goes, T.J. found himself at a party taking a hit of a joint that's being passed around, just to be sociable, you understand, and, instead of becoming mellow and introspective, he becomes agitated and verbose, and manages to gather a crowd of onlookers to listen to his ravings.

A star is born.

And, with or without the dope, T.J. Dawe has been doing almost exactly that ever since. In fact, he's made a career of doing just this - telling his stories with such hyperactive intensity that his audience is left gasping in disbelief. And listening to Dawe roll out the contents of his wildly pinballing mind for over an hour one gets the impression that if he wanted to, he could rant much longer than the confines of a single Fringe performance. Much, much longer.

Part of this is, of course, only an illusion, as Dawe isn't just spewing off the top of his head; Totem Figures is a highly polished gem of a show, one that its creator has only made look easy through some very hard work. And he tells you that. And a lot more. There are a lot of details in a T.J. Dawe performance. At times, this can come across like a lecture from a stoned, second year liberal arts college professor. Dawe wants you to know everything he knows. And be ready, there might be a quiz on Friday.

But one hopes that there's something else out there for Dawe to latch on to for his next show, otherwise it could turn into a show about a show about putting on a show. And that could get a little tedious, even from a master storyteller like T.J. Dawe.

As a friend of mine once told me many years ago: "Hey, just because if happened to you, doesn't make it interesting."