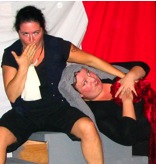 I’ll get this out of the way first. I’m a big musical theatre nut. When I showed up at Wood Hall to catch the Victoria Fringe premiere of Les Ms., I knew I wasn’t alone in that. A good-sized number of fringe-goers were there to see this send-up of the Broadway/West End classic, performed by Nelson-based performers Robyn Lamb and Lisel Forst.

Upon entering the venue, I overheard the Rick Astley tune “Never Gonna Give You Up” playing over the house speakers and wondered if this was some form of “Rick Roll” foreshadowing. I brushed it off as a case of 80’s nostalgia.

I probably shouldn’t have.

The choice of putting on a piece such as this is a brave one, especially for first-time Fringe performers. First off, you really have to have seen Les Miserables to get a lot of the inside references to characters and story. If you haven’t, Les Ms. definitely isn’t for you.

The fact that these two performers handle the switching of roles is admirable, especially the quick grabbing of props and costume pieces to signify character changes. They’re also having a lot of fun up there, and the audience was with them all the way. Musical theatre fans are a die-hard breed. I don’t know if they had a director for this, or if they directed themselves but they may have been better served to have an outside eye. That being said, Robyn and Lisel know how to get a laugh and play off each other’s strengths very well. Both are great at physical comedy and each can sing (kind of important in a musical). Singing this entire hour-long piece a cappella is a daunting task, and at times they did get “pitchy.” Robyn is the more accomplished singer, and she gets a chance to really show off those chops with her rendition of “Bring Him Home.” She also plays the most memorable of all the characters in the show. Her portrayal of Eponine is one of the refreshing moments of the play. The scenes in Les Ms. that incorporate current Top 40 hits would be more effective if they were not drawn out so long. Often just a taste of pop culture is enough, especially in a show that is primarily sung.

I really wanted to like this show but I couldn’t get behind it - no matter how hard I tried. I love Les Miserables, having read the original novel by Victor Hugo and seen the musical several times. I have a special place in my heart for the piece, and this show just felt like an extended Saturday Night Live sketch at times. And no amount of talent in the world can save those.