If We Were Birds - a reinvented classic 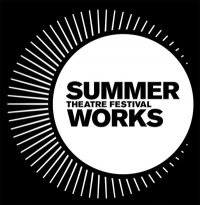 If We Were Birds

A re-telling of Ovid’s story of Tereus, Philomela and Procne, Groundwater Productions' If We Were Birds opens with Philomela (Tara Rosling) appearing from behind an overturned table. She opens her mouth and blood spills from her lips. The echo of Shakespeare’s Titus Andronicus (which was inspired by the same source story) is unmistakable. Unlike poor Lavinia, Philomela has had her tongue sewn back in so she can tell us her tale.

And what a tale it is.

While I admire Titus Andronicus in the same way I might admire a Quentin Tarantino film, I can’t say it’s something I want to sit through too often. There’s nothing particularly redemptive about the early Shakespeare work, although it was one of his must successful plays during his lifetime and it seems to have garnered a new relevance in our gruesome, paranoid age (Vancouver has seen two productions in the last couple of years alone).

With her take on Ovid, playwright Erin Shields gives us with If We Were Birds a work that resonates deeply not just with our current troubled world but on deeper, humanitarian and historical levels. In this round of reinterpreting classic stories, I’ll take Shields over Shakespeare. If We Were Birds is that good.

The core story is pure simplicity. Tereus (Geoffrey Pounsett), a warrior-king, rapes his sister-in-law, cuts out her tongue and holds her captive so that she will not reveal what has happened. His wife, Procne (Philippa Domville), is alerted to the crime and for her revenge, kills their son and serves the boy to her husband for dinner. For Shields, this simple story provides a vessel that holds profound truths about the impact of male violence on women.

Shields fills out the narrative by having a chorus of five women representing different 20th century conflicts, including Rwanda, Bangladesh, Bosnia-Herzegovina, Nanking and Berlin. Each woman tells her personal story of rape and male violence and their individual reactions to it. These stories are horrific. Shields researched each of the conflicts and the narratives she uses are a synthesis of the experiences and stories of real women.

I’ll confess that going in I was resistant to the idea of a chorus of contemporary tragedy. It sounded heavy-handed and my fear was that it would be an over-elaboration of the core theme of the Ovid piece.

My fear was unfounded.

Shields uses the conceit wisely and it works exceedingly well in this production. For me, it was particularly effective at illustrating how the comfort of our society – like ancient Greece – is founded on the unseen misery of others. While Procne and Philomela worry about domestic issues and their men, including David Fox as their father Pandion, plan for conquests, their society is permeated by those who have suffered through either their neglect (the women) or their violence (the men). I couldn’t help but be reminded of the fact that in any Canadian city reside individuals who have suffered or witnessed suffering that we can little imagine. And just as these individuals mix unnoticed amongst us, blending in and forgotten so too is our society built on the interconnected forces of neglect and violence that both shape the world and leave suffering (and a desire for revenge) in their wake. This is true whether we support directly or indirectly efforts to secure future sources of oil or through buying cheap crap at Wal-Mart.

The particular lens for If We Were Birds is violence by men on women – particularly rape – and the women’s response to it – specifically the desire for revenge. Some of these stories have perhaps surprising outcomes: for example, women taking up arms to exact revenge on those who’ve harmed them. These responses are surprising because they are more in line with our perceptions of male forms of revenge. So effectively does Shields weave these contemporary narratives through the Ovid story that when we get to the climatic dinner scene not only does it seem like a logical response to Pandion’s crime, it seems almost normal. I can’t stress enough what an achievement this is. When Titus serves up his pie, he seems like an unhinged madman. When Procne serves dinner it seems rational.

If We Were Birds is important not just for the issues it raises but also for the choices that director Alan Dilworth makes and for the depth and compassion of the performances by all the actors (they are uniformly excellent). This is a production that celebrates the power of spare theatrical story-telling. It takes a script that is sharp and elegant and through the use of judicious staging – the beautiful transition of a table into a bath is a real highlight – creates a story that can only exist in theatre. How rare a delight is that?