Lives Were Around Me: A Deliciously Eerie Walk About 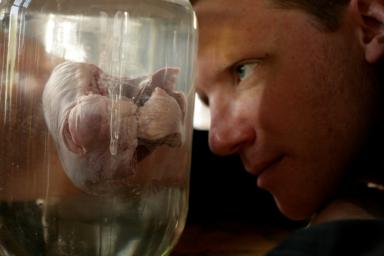 David McIntosh, Lives Were Around Me, Photo: Amy Pelletier

"Battery Opera’s":http://batteryopera.com/ production event *Lives Were Around Me* is an intimate and startling theatrical experience. Although I have little idea of what happened, I was captivated by every moment.

The production is described as “an intimate guided tour” in which a small group of audience participants (in my group, there were four) are taken into the Eastside. David MacIntosh, our host and the Artistic Director of Battery Opera, met us outside the "Alibi Room":http://www.alibi.ca/ on Alexander Street. Sporting the look of a dapper gentleman with a suit and umbrella, he led us with absent charm to our first rendezvous.

From the moment our walk began, I became almost preternaturally aware of my environment. The architecture, the cold, the desperate characters of the south end of Main Street… all these variables were now part of my theatrical experience. I sloughed off my usual armor of disinterest (which a woman invariably must don when walking in a sketchy neighborhood) and felt safe enough to take a good look around. I saw the Eastside with greater clarity now that it had become part of a performance. A discussion amongst my fellow audience members about rats almost seemed to have been scripted. Where did the theatre begin and the real world end?

Our host left us suddenly on the street with the warning that we “can’t understand everything we hear. It’s not possible.” He assured us someone would meet us shortly.

After a few minutes, our first Guide (Paul Ternes) materialized and the narrative began. As we walked, he talked. The text, from "James Kelman’s":http://en.wikipedia.org/wiki/James_Kelman novel _Translated Accounts_, was strangely stylized and old-fashioned. Although the story had little to do with where we were, the loneliness and desperation of the text resonated with our bleak urban environment. The narrative, haunting and strange, was surprisingly hard to follow and I was frequently distracted by the drama of the street. The citizens of the Eastside were sometimes unwilling participants in our experience. We weren’t always welcome. As we entered into a dingy watering hole, one drunk female patron shouted out, “why do you people keep coming into our bar?” This was a side of Vancouver I would never have seen if not ushered in by a protective spirit. The lives around us that were so frequently invisible were now on display.

After the bar, went to the Vancouver "Policeman’s Museum":http://www.vancouverpolicemuseum.ca/, which was dark and closed. Our guide unexpectedly opened the door and led us in. Again, there was the illicit thrill of being someplace where I didn’t really belong. As we moved through the darkened rooms, I was captivated by the macabre surroundings and frequently forgot to listen to my guide. I berated myself to pay more attention. But then I realized that the _feel_ of what was happening was the real story – not the linear events that I might piece together out of the script. The congruence of the text, the environment and my own reactions were creating the theatrical event. The boundary between observation and participation was rubbed out.

Battery Opera “offers a view of the contemporary body as a site of intersecting and displaced cultures and histories – a body that breathes, speaks, sings, thinks and dances.” What made this adventure so compelling was that it was _my_ body that acted as the point of intersection. My body was the landscape upon which the East Side and Kelman’s narrative could meet. My experience of the piece was uniquely and hauntingly my own.

As our host said, “You can’t understand everything you hear. It’s not possible.” While this is undoubtedly true, there is no loss for this lack of comprehension. A clear understanding of what was being said would have left no room for interpretation. As it was, the narrative and observer met in the space before comprehension, and the experience was far richer for it.

_Lives Were Around Me; Conceived, Directed, and Hosted by David McIntosh; performances by Adrienne Wong, Paul Ternes, Aleister Murphy, and the city itself; drink provided; departs hourly from The Alibi Room (157 Alexander Street); every Tuesday evening in January and February, 6pm, 7pm, 8pm, 9pm & 10 pm, continues February 3, 10, 17, 24; for more information be led_ here:http://batteryopera.com