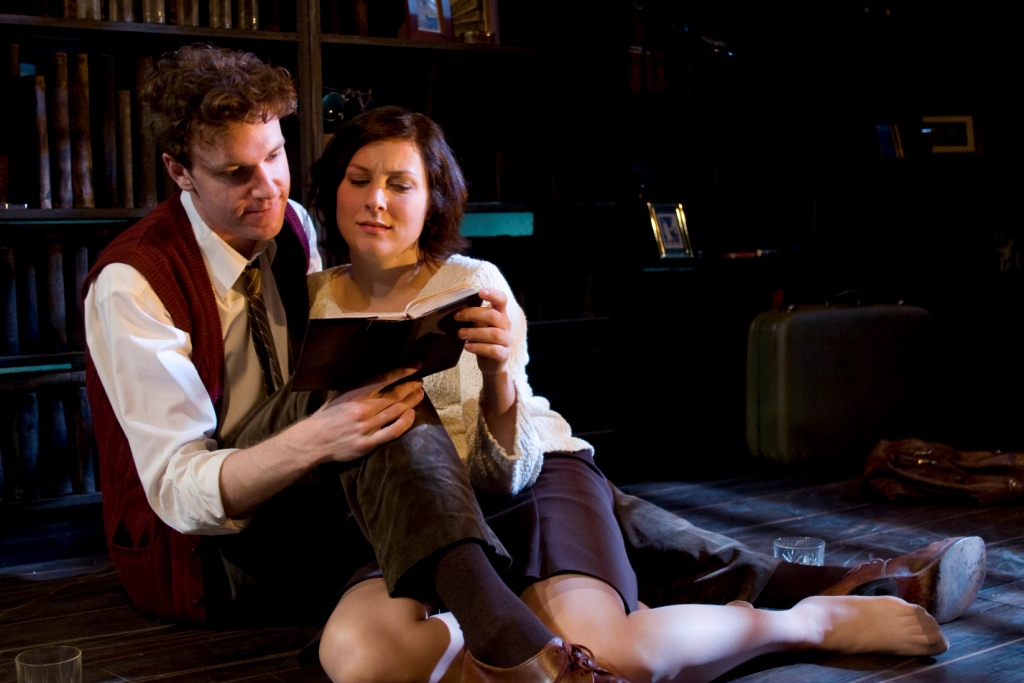 Rudi in happier times, East of Berlin with Brendan Gall and Diana Donnelly

This "Tarragon Theatre":http://www.tarragontheatre.com/ production of *East of Berlin* by Hannah Moscovitch is a Jewish revenge fantasy. That’s a provocative statement, so let me make my case. Rudi (Brendan Gall) is the son of an SS ‘surgeon’ who escaped Germany after the Second World War with the help of ‘Project Reinhardt’, a fund originating from Nazi German bank accounts that drew wealth from valuables stolen from concentration camp victims.

Father, mother and Rudi end up starting a new life in Paraguay. At the age of 17 Rudi finally learns of his father’s past. The news fractures Rudi. When we first meet him, about 8 years after the revelation about his father, sitting in the library of his parents’ house, he’s a quivering, chain-smoking wreck—so nervous he can’t finish a sentence. Rudi has devoted his life to shaming his father, including having a homosexual affair with fellow student Herman (Paul Dunn), pretending his parents are dead, becoming fascinated with all things Jewish, falling in love with Sarah (Diana Donnelly) a Jewish woman from the US, and fathering a child with her. Each of these acts is intended as a dagger to the heart of his proud Nazi father.

The problem with this set-up is that there are three actors on stage and none of them is the father. Nazi dad isn’t the pincushion. We spend all of our time with Rudi. So it’s through identification with him that we learn how to think about the father behind the library door, about the distressed mother, about post war Germany and Paraguay, etc. It is Rudi that playwright Moscovitch puts through the motions. And the motion seems to be one of trans-generational guilt. I’m no Torah scholar but I believe a ‘sins of the father’ psychology runs through it rather thickly. Perhaps taking a lead from that source, Moscovitch and company put Rudi through undeserved Hell. He is severed from his father and mother, cut-off from being able to find any value in his background as a German, and he gives his heart to a woman who must ultimately reject him and who denies him a chance to father their child. In a final desperate act he kills himself. I suppose it’s the only logical outcome for someone who has fully internalized German guilt over the genocide. But while Gall offers a performance that is layered with neurotic complexity, the playwright pushes Rudi through the self-flagellating acts of the story in such a way that he becomes an embodied cautionary tale more than a character.

But who is the lesson for? Current and future generations of Germans? Germans who will never ever escape the sins of their fathers? Germans who will be guilty FOR ALL TIME? It’s as if Mossad, having run out of Nazi war criminals to hunt down (since they’re almost all dead), decided to persecute the children of Nazi’s to keep the ball rolling or, as I’m suggesting, to satisfy the playwright’s hunger for revenge, a revenge that is probably now two generational steps removed.

In the relationship between Rudi and Sarah, it looks like Moscovitch is trying, half-heartedly, to explore the possibility of mutual healing. Each character is fascinated with the other’s ‘otherness’. Rudi seems to be seeking absolution, while Sarah seems to be attempting to overcome her fear and hatred by literally sleeping with the enemy. But the melodramatic ending and the playwright’s yearning to make Rudi suffer for some imagined ‘inherent’ characteristic of German psychopathy preclude absolution or healing. Like a good Jewish-Canadian Mountie, Moscovitch gets her man.

Again I ask, who is this revenge fantasy for? It’s for the tribe, the homies, the community that seeks to reinforce its cohesion through the retelling, and even in the reliving of the horror. I understand this. We of the Hellenic Diaspora, like Greeks back in the homeland, repeat the tales of what would now be called ‘ethnic cleansing’ at the hands of the Turks in 1922; after inhabiting Western Anatolia for almost 3000 years, a million Greeks were forced out in a bloodbath. We lament the loss of the great cities of Smyrna (now Izmir) and Constantinople (Istanbul), the spiritual center of the Greek Orthodox religion. And I suppose I could write a play about a self-hating young Turk who will simply never be able to wash the hereditary bloodstains off his hands. It could also feature an honourable Greek who tries but fails to forgive, and who, suffering another betrayal at the hands of the terminally dishonest Turk, must turn her back on it all, while the self-hating Turk, realizing there is no chance of reconciliation, stabs himself with a scimitar or beats himself to death with hookah-pipe. I might then leave a performance of my play feeling righteous, and that I have somehow done justice to the memory of those grandparents of mine who survived the fire and slaughter of Smyrna. And like a good Hellenic-Canadian Mountie I will have got my man.

In East of Berlin there is no “then what.” There is just the inescapability of the past. No need for a bridge—there’s no river to cross. I begin to understand why French theorists like Barthes and Derrida were so intent on undermining cultural stereotypes by destabilizing easy categories. East of Berlin operates on the harsh binary of ‘German’ and ‘Jew’. Are these categories nothing more than inherited narratives? In East of Berlin, to be German is to be forever polluted by an ancestral act (sounds like Greek Tragedy) with no possibility of redemption (witness Herman, the only other German on stage in the play, forever jaded by knowledge of his own father’s participation in the death camps). To be Jewish means to build a future on the utter defeat of your German nemesis, even if that nemesis was too young to have anything to do with your inherited suffering. In this binary there are only the guilty (by association) and the innocent (due to eternal victimhood). Under the guise of examining the psychology and consequences of German responsibility for the genocide of the Jews, the play is really a smug celebration of victimhood. Like so many Canadian plays on the subject of systematic complicity in atrocities enacted on a vulnerable population (The Monument by Colleen Wagner comes to mind), it panders to middle class liberal guilt. There is no genuine question posed, and therefore no honesty in the exploration.