Swan Song for Maria: a wistful tale of love and aging 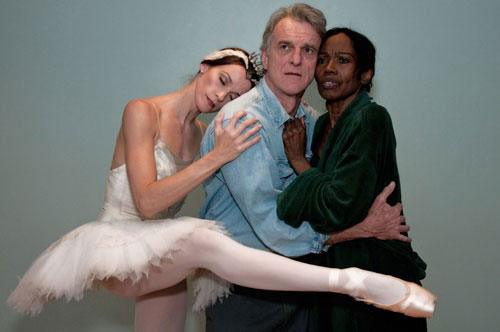 Billed as a contemporary reimagining of the ballet Swan Lake, Swan Song for Maria on as part of this year's Toronto Next Stage Theatre Festival is more enjoyable if one does not strain to decipher the parallels between the two works. This two-hander from playwright Carol Cece Anderson is, more overtly, a wistful tale of love and aging played out by Joe (John Blackwood), a rebellious writer of French-Canadian origin, and Jillian (Lili Francks), his actor/dancer wife. The couple, both creeping along in years are prompted to reflect upon their pasts and confront their future when it becomes increasingly apparent that Jillian's mind is eroding under the influence of Alzheimer's.

Anderson's script is earnest, albeit imperfect. Her dialogue is often poetic, but does occasionally veer into the cheesy, and the absence of characters outside of the two protagonists makes the ninety minute show feel avoidably long-winded and repetitious. Anderson's strongest contribution is a captivating subplot about Maria, a Cuban ballet dancer torn away from her lover because of his political leanings. It is almost tempting to say that Swan Song for Maria would have been considerably stronger if Maria's story had eclipsed Joe and Jillian's, and not the other way around as it stands now. To Anderson's credit, she does wrap up this Joe and Jillian's narrative with a touching and well-woven ending - even if it does go on one melodramatic beat too long.

Director Mark Cassidy certainly doesn't attempt to reinvent the wheel with this production, but his calculated use of off-stage moments and sound effects create some of the most effective moments of the entire show. The participation of National Ballet of Canada First Soloist Stephanie Hutchison (with credentials like that she was, needless to say, exceptional) also adds an element of luxury and elegance to the proceedings. John Blackwood is not utterly magnetic in his part but does exude warmth and cheekiness in appropriate quantities. Lili Francks is not quite as strong, delivering an overcooked performance with her words erupting in clunky bursts.

Swan Song for Maria has the potential to resonate, especially with anyone possessing a certain amount of life experience, it might just need a little extra spit and polish to pull it off.

Swan Song for Maria is part of his year's Next Stage Festival. For more information swan here.