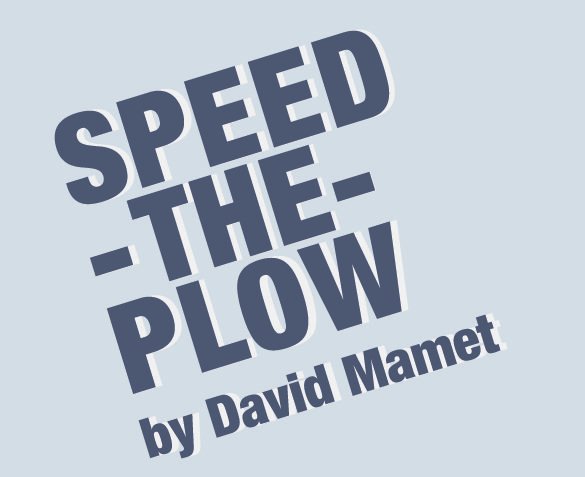 no artwork for speed the plow...so here's a logo

Mamet’s Speed The Plow* is a rapid-fire dissection of the corrupt world of Hollywood movie making.  In the play, Head of Production Bobby Gould struggles to determine whether he should green light a vacuous blockbuster or an adaptation of an apocalyptic book of revelatory poetry.

“Being a good man” suddenly has multiple interpretations.  Is he good if he does his job and makes money for the studio, or good if he produces a certain flop in the interest of moral art?

Terminal Theatre’s production of Speed the Plow at the Havana Theatre is very well-directed by Sarah Szloboda, who manages to create a hot house of pressure in a tiny black box theatre.  The play’s success largely depends on the skill of its actors, who must deliver Mamet’s operatic text with brisk precision. Mikal Grant (Bobby Gould), Ivan Wanis Ruiz (Charlie Fox), and Alexis Kellum-Creer (Karen) rise impeccably to the challenge. Grant is able to deftly navigate the journey from superficial power boxer to conflicted humanitarian. Without his ability to reveal conflicted emotional depths, Mamet’s text would be reduced to a clever articulation exercise.  Gould’s ability to reveal the vulnerability beneath his producer’s armor gives the play the moral depth it needs to be effective. Kellum-Creer’s earnest performance leaves us with the unanswered question: is she a naïve do-gooder or a Hollywood whore in disguise, trading sex for power?  Ruiz climbs deftly from groveling wannabe to controlling shark, only occasionally falling into the Mamet language trap and sacrificing emotional authenticity for the rhythm of the text.

Speed the Plow poses some compelling questions for the Vancouver film community.   Where do we draw the line between commercialism and art?  What do we sacrifice by catering to the bottom line? And, most importantly, what kind of person does this industry turn us into?  Szloboda’s Speed the Plow is a swift, powerful analysis of the pressures of the film industry.  If you’ve ever wondered where your movies come from, Mamet’s scathing play offers a dark perspective.

*Because the title seems so unrelated to the subject, I dug up this quote from Mamet explaining his choice: “I remembered the saying that you see on a lot of old plates and mugs: 'Industry produces wealth, God speed the plow.' This, I knew, was a play about work and about the end of the world, so 'Speed-the-Plow' was perfect because not only did it mean work, it meant having to plow under and start over again.”