Songs for a New World: shakes plank reviewer of his convictions (almost) 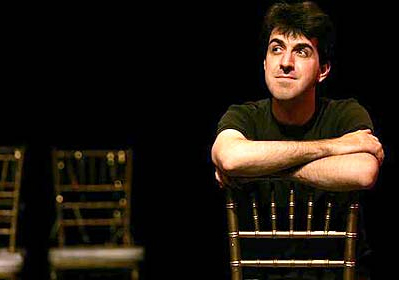 This is Jason Robert Brown

Let’s start with a candid statement: I am not a fan of the musical revue. Performance is wonderful, but please, hitch it to a story.


This is one of the reasons my relationship with Opera is often love/hate; sure, one of the defining characteristics of opera is the telling of a story through both theatrical and musical means, but more often than not these stories are so full of holes they practically make a whistling noise. The closest modern day comparison would be the “don’t go in there!” moments of horror movies. Why these characters insist on going into dark rooms by themselves when they know the killer could be in there is beyond me. Similarly, so many young operatic lovers could experience happy-ever-afters if they simply followed up on their creepy uncle’s spurious and self-advancing claims with some basic questioning - but they never do. Seriously, do you know how many stabbings and poisonings could have been avoided if operatic protagonists weren’t such gullible and unrealistically flappable cry-babies? I get it, it’s opera, it’s meant to be overwrought and exaggerated - but that doesn’t mean it has to be emotionally rudimentary. In fact it’s many of the great opera comedies, like The Barber of Seville, that best embody the art of plot driven storytelling, but they are rarely held up as examples of great operatic tales.

But I digress - back to musical revues. Because of their inherent lack of narrative, the worst of them are like watching a Lawrence Welk rerun without the mitigating cheesiness of ultra-white smiles and orange polyester suits. The Canadian Stage Company was certainly guilty of mounting such a crime some years ago with their abysmally pedestrian production of Side-by-Side Sondheim. Honestly, how do you screw up Sondheim?

In stark contrast is Charcoal Sketch Production’s presentation of Jason Robert Brown’s, Songs for a New World. Although the show comes off as a collection of excerpts from previous shows (some of the songs share the same characters and settings), they were in fact all originally composed for this work, resulting in a quilt-like structure. The very fact that I call it a musical revue at all, and not an abstract musical, or song-cycle might be controversial to some; call it a faux-revue if you must.

I had a chance to sit through a dress rehearsal for Songs for a New World and was pleasantly reinvigorated by their effort. I’m still not a convert to the musical revue, but I have to give a hand to those, like Charcoal Sketch, who can take what is arguably a series of musical non-sequiturs and imbue it with a sense of cohesion and flow. In terms of presentation, it was more theatre than cabaret; the set design was limited, but even a skewed picture frame and a vintage microphone combined with some stylish lighting made for a striking image.

Even if there was no narrative through-line, Brown was obviously careful to structure the piece around a thematic through-line. The idea of desires, dreams, and disappointment kept bubbling to the surface, and as much as that might seem cliché in the world of musical theatre, there is an everyday tangibility to Brown’s characters that brings the songs down from soaring schmaltz to relatable issues.

Performers Arthur Wright, who possesses a voice about ten times as big as he is, and Megan Poole whose natural earnest quality serves her well as an actor, captured my interest and admiration. Director Jeff Jones is also to be commended for his earthy and unpretentious treatment of the work. He could have done more to tie the characters together and force them to interact with each other - but then again if there isn’t a good amount of wide-eyed soliloquial singing to the back of the house, it’s not a musical revue.

I will still take a straight up narrative over a ninety minute collection of show-tunes any day of the week, but I can say that quality productions from companies like Charcoal Sketch can, and do, put a dent in my opposition to the musical revue format.

Songs for a New World, produced by Charcoal Sketch, had a short run early in the month at Theatre Passe Muraille in Toronto. For more information go here.