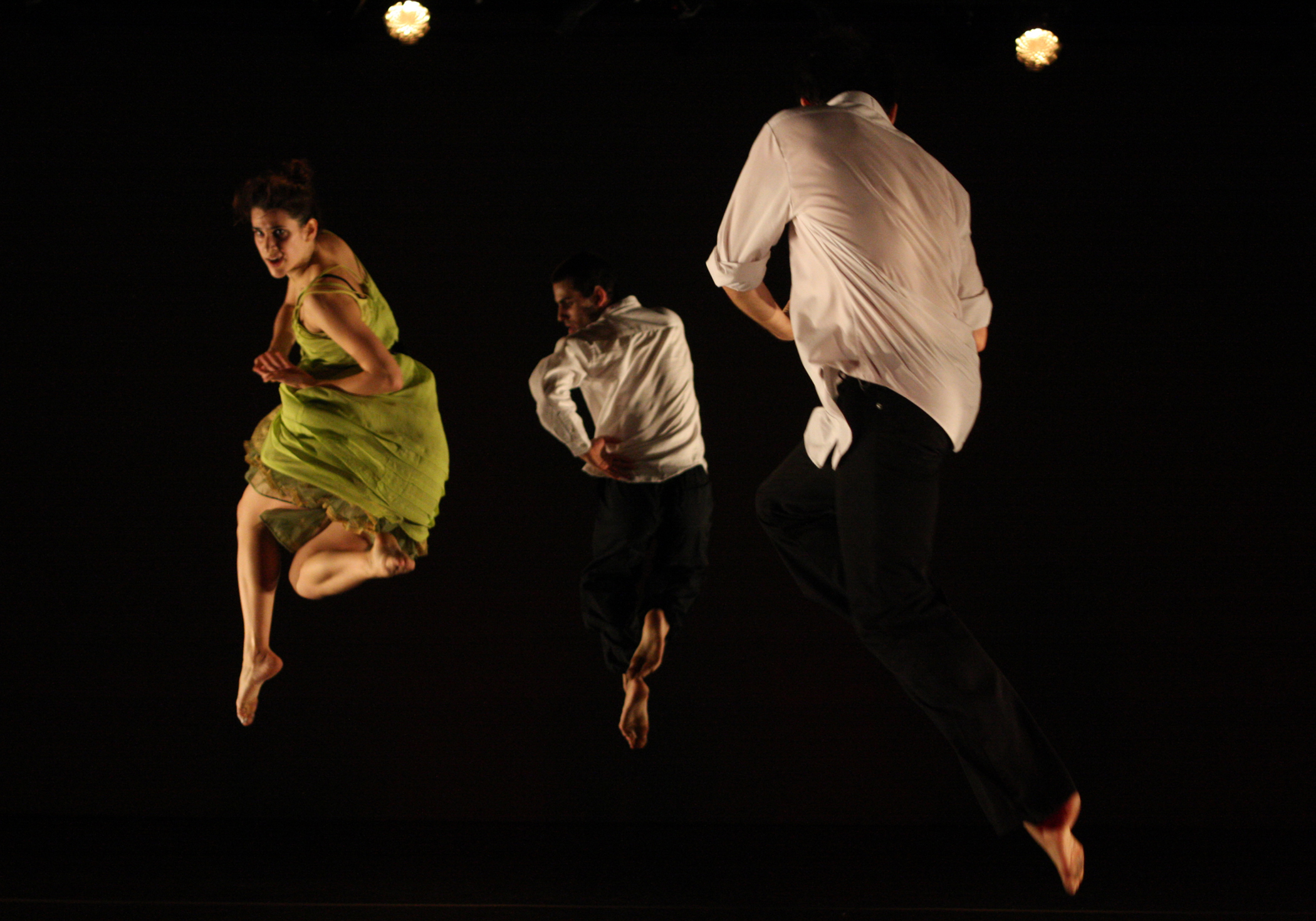 The Chutzpah! Festival coninues: on March 8th Sidra Bell Dance and Gallim Dance of New York presented a double-bill performance. Though vastly different in style, neither Sidra's Bell's “Anthology” nor Gallim Dance's “I Can See Myself in Your Pupil” overtly showed their conceptual underpinnings. Both companies focused on the purely physical rather than intellectual. Sidra Bell Dance explored polarities, representing the body as sultry and mechanical, while Gallim Dance shook things up with a wild, free-for-all performance.

Sidra Bell Dance presented, “ Anthology,” which focused on musculature, emphasizing strength so that bodies seemed charged with energy as they moved:

Lights rose just enough to illuminate two figures, male and female, splayed on chairs. They mirrored each other as they took to the floor, strutting in and out of shadow to a soundtrack of spare, electroacoustic music. Their motions were strong and mechanical. They stayed upright on the vertical axis. There was a haughty sexual tension as they moved, hip-joints swivelling, backs bending, chests opening.

New dancers took the stage in a duet, their motions set to moody, dark electronica. She looked like a bullfighter, with a foam of lace at her throat, black leggings and fire-engine-red stilettos. He wore a black frock coat over barely-there shorts. Together, they were glamourously chic. They dipped and swayed in a staggering, graceful duet; high-stepping round each other, they clashed, parted, returned. The movements tested the body's natural balance – just barely controlled, about to tip over the edge.

Two female figures entered from below the stage, gatherings of black gauze fluttering at their hips. Theirs was a predatory grace, their bodies muscular in their folding and unbending, always taut. The coiled strength in every gesture gave vividness to the line of every movement.

The final segment of the performance, a solo, was arguably the weakest. As physically demanding as the earlier pieces, it lacked direction, and the dancer seemed too alone in her frensied motions -- whatever haunted her was abstract beyond interpretation.

Despite this, Sidra Bell Dance offered a uniquely interesting performance, showing a vocabulary that was spare, erotically charged, and powerful.

With “I Can See Myself in Your Pupil,” Gallim Dance presented a pastiche of edgy, wild, rebellious movement:

As the piece began, seven dancers hopped to the beat in alternate groups. One fell, and the solo that followed  was a curious exploration of muscle-structure and flexibility, as she struggled to regain her feet. Throughout the piece this deliberate clumsiness was a recurring theme, used to test the the “rules” of dance.

Awkward movements shattered all attempts at seriousness. They created a feeling of anxiety, as we watched figures tottering painfully on turned ankles, then collapsing. When movements were accelerated they became aggressive – the dancers seemed to be railing against constraint, against grace.

Dancers wrestled through duets, one partner climbing astride another, next threading his torso between her legs, while she shoved him across the stage useing her head as a lever. A group of dancers circled each other, their fists raised in defiance, while a singer chanted  “I will deliver the explosion.”

The full ensemble took the stage for a piece with Latin-sounding trumpet. Lit from the front, the dancers' bodies cast multiple shadows on the screen behind. They painted damatic shadow-shapes that looked like lost negatives from Edward Muybridge's laboratory.

In a Bollywood infulenced piece, the dancers interpreted Indian pop in ways that broke with cliches of female flirtation, creating something both subtler (more muscular less posed) and raunchier.

Gallim Dance's performance relied on physical action to create interest and tension. In its least successful moments, the performance seemed overly cluttered, bouncing from one theme to the next  without a coherent thread to join them. At its peak moments, the group offered an experience of brash, uninhibited physicality that felt exhilarating.

Gallim Dance - I Can See Myself in Your Pupil