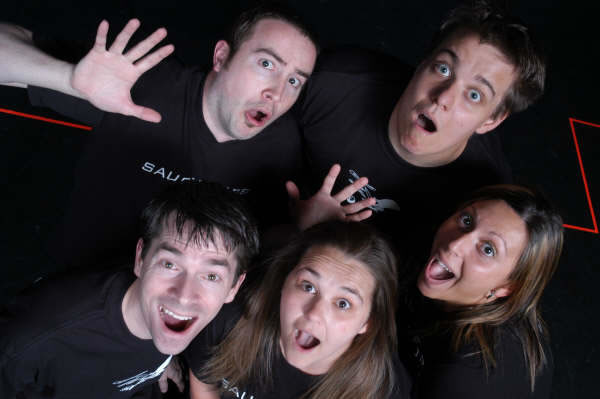 Victoria: Don’t let the title mislead you: Shortened, courtesy of writer Cayman Duncan and the Saucy Fops is a portfolio of shorts willing to take its time with its scenes. There’s fuller characters and longer set-ups than sketch shows this reviewer remembers from Fringes past. The results are quite funny and even have some dramatic rewards as well.

Cayman Duncan’s writing is a treat, especially since he isn’t afraid to really flesh a story out while making us laugh. There’s an especially good scene where two of the fops get lovey-dovey and revisit their first meeting in a soap-operatic glow, whilst the other two fops re-enact the straight truth. By the way, he’s a recreational street mime and she’s a makeup-encrusted cosmetics saleswoman (and they both have volcanic temperaments and sex drives). The scene also demonstrates the diverse personal charms each of the fops brings to the show.

Billed as a series of short plays but feeling like a sketch show, the writing sometimes feels like it has to choose one or the other, mostly as a matter of pace. The pacing doesn’t have the rapid fire quality of, say, BOYGIRL, but makes up for it with the success of the adventurously written sketches. The opening sketch—and its bizarre, “okay, this time squat!” edits by its faux-director (Stephen A. Sawka)—coaxes eruptions of laughter from the audience. The penultimate scene, an even more over-the-top avant-garde movie trailer of their own show, demands all sorts of theatre chops: swift lighting changes, equally swift entrances and exits, a writer smart enough to know which of his jokes are funny the second time. The demands are all met and the house loved it.

Where things do fall flat is where one scene or another keeps revisiting a so-so joke, especially since each sketch is given so much time to grow. There’s a Christmas morning skit which does this. It starts and ends superbly, but the whole in-between of it is dad getting bogus gifts. The joke’s been done before, even if the story around it is particularly good. Similarly, shortened’s very successful movie trailer was prefaced by a less-so argument between an avant-garde trailer-maker and his boss. The Saucy Fops are always better seen than spoken about- especially given their considerable talent for physical comedy. Duncan’s script really does save the best for last and it no mere review can prepare an audience for the techno tennis dance off that ends the night.