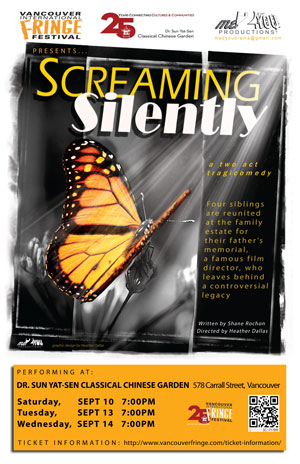 Frankly, the title says it all -- because that's what I was doing throughout most of the show.  Screaming Silently is a trainwreck, I'm afraid, and no amount of cute stage business or earnest delivery can save it.  The play is about four adult siblings reunited upon the death of their egomaniac film-director father, one Giles Forbes.  In the style of such stories, the siblings return home to pay their last respects and rivalries and dark secrets emerge.

The central flaw as I see it is that the playwright, Shane Rochon, takes on far more than he can handle with this script. Anxious to tackle big themes of evil and redemption, Rochon inflicts a lot of tangled melodrama on the audience and then fails utterly to resolve the hot mess that he created.  I know it's not polite to give away key plot twists -- but I was left baffled and appalled.  Why did I have to sit through an a good forty-five minutes of slow-paced formulaic family drama only to be hit with a soap-opera-worthy revelation involving rape and incest at the end of Act I?

Two brothers return home to confront their demons -- why didn't Daddy love us they cry?  At the family manse they meet up with Sister #1, the dowdy do-gooder who just wants to remember Daddy as the saint she knows he was.  Unfortunately the pity-party is wrecked by the arrival of Sister #2, the sultry Hollywood starlet who knows that Daddy's love ain't all it's cracked up to be.

Family dramas of this kind can be powerful and they can be funny. The play has a structure vaguely reminiscent of anything from Chekhov's Three Sisters to the Royal Tenenbaums and with the right handling, there might have been something to salvage in this story.  But Act II of Screaming Silently is all about the fumble.  Having dropped a bomb on the audience with a scene of drunken revelation by Sister #2, the story marches along with about as much emotional tension as a deodorant commercial.  The brothers, who started the evening squabbling over salted almonds on a train, continue to punch each other on the arm in a manly fashion. Now and again they pause to trade platitudes about "moving on" and learning to forgive their father's "imperfections."  Meanwhile, Sister #1 gazes quizzically into the empty air (normally occupied by hallucinations of her father spouting Sunday-school truisms) and pronounces that "it's never too late to do the right thing.”  At this point I nearly choked on my tongue.

Brother #1 finds true love along the way with the girl-next-door.  And Sister #2 (remember her?), well, she's a tough cookie. Having got that little piece of nasty business off her chest, she proceeds to, well, move on.  She shares a heartwarming scene with her heretofore unacknowledged offspring (what is the appropriate term for a brother-son anyway?) And the boy in question delivers the evening's moral lessons, cobbled together out of what sounds like old Smashing Pumpkins B tracks.

I'd like to think that the actors did their best with what they were given.  Unfortunately, none of them were strong enough to carry the dead weight of this show.  Alanna Kennedy (the girl-next-door) is so soft-spoken as to be barely audible, and Bill Ashbee (Daddy's sainted ghost) should stay in children's theatre where his one-dimensional delivery will go over the heads of the pre-school crowd. The others should stick to their day jobs.  Where this leaves Rochon I am not sure, but I would strongly suggest reworking the script for a more appropriate emotional tone. Jared Erikson, the youth saddled with the role of unacknowledged kin, may yet have the makings of an actor -- it's hard to tell, since his main responsibility was to shrug and act like an indifferent teen.

Last of all, I am peeved, because although this show was staged in the magnificent Sun Yat Sen Garden, the play was barely integrated into the venue. No use was made of the unusual setting, beyond a vague mention in the script of "that garden over there." So all we got as an audience in this unusual location was a chill from the open doors and a headache from the bad acoustics.

Give this one a miss, or you too will be screaming silently by the end.