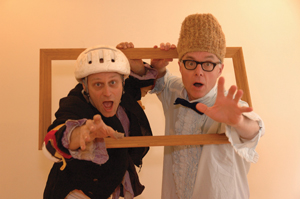 One of these men is Balthar - but we can't see his junk so we can't be sure...

Outside the venue I wait patiently to be allowed entry. Beside me sits a slip of a woman, gray-haired, back and hips perfectly perpendicular. When approached by the usher, trying to hand her a ballot to vote for the show we’re about to see, she haughtily informs the usher that she does not vote. On the other side of her a couple sits down to enjoy a delicious pastry. Standing at the kiosk a man and woman seem unsure if this is the show they’ve pre-booked tickets for.

A third couple hover near the door. A man in platform sneakers, knee pads, a jock-strap, tux jacket, with tails, and to top it off a child’s foam bike helmet begins interacting with the small group gathered. Some try to ignore his almost exposed junk, some engage him readily. There is already an air of awkwardness and the performer is still outside the venue.

Once inside things get rolling quickly and crazily. There is only one performer on stage, when the program lists two. With a few quick twists he sets a plastic alarm clock. Taking centre stage in the aforementioned outrageous outfit he introduces himself as Balthar. He begins by answering the question of where his partner is: due to a death in the family he is unable to attend.  The awkwardness quotient increases. He ruminates on mourning. A moment later he notices a friend in the audience of nine and mentions the death of a mutual friend. The audience member is stunned, unaware that his friend has passed away. There is an uneasiness in the room.

The subject of mourning is again addressed and Balthar lights a stick of incense, wafts the smoke around the room. Across the aisle from me the gray-haired woman sits more erect than before, plugs her nose and looks close to vomiting. That awkward feeling is reaching a peak. Balthar attempts to diffuse her distaste, extinguishing the incense and trying to force the smoke out the door.  She responds by covering her nose and mouth with a handkerchief. Sheepishly Balthar resumes discussing death and dying. The couple unsure if this is the show for them get up and dash out the door. They are immediately followed by the woman offended by the incense. And the awkwardness reaches perfection and everyone breaks out laughing. In the first three minutes of Saving Faith all boundaries have been broken and it’s hilarious and heart-wrenching and extremely satisfying.

Following this spectacular opening the remaining members of the audience are treated to gonzo spiritual-theatre therapy lead by a clown shaman. This is probably the closest to a spiritual experience that I’ve ever had. Balthar gets to the heart of death and dying, which we are all doing, by the way. He cracks a bottle of wine, his preferred method of mourning, and passes it among us, encouraging everyone to join him. He pours some on the ground for those who have died and cannot drink, or as it is commonly referred to, pouring some out for your fallen homeys. There was a session of hand-holding and deep thoughts on those who’ve died, on happiest moments. There were deeply funny moments shared amongst the small group. There were secrets revealed, and a discussion on the philosophy of the slut, followed by a brief lesson in Tibetan Buddhism. And again, more laughter. This is a clown show after all.

The program promised “the twists, turns, fun, irreverence and spontaneity of the clown’s universe” and I couldn’t think of a more accurate description of the performance I attended. Most shocking of all, I actually took time after the show to talk to my fellow audience members. How often does that just happen? I don’t know exactly what you’ll get when you sit down to watch Saving Faith but I know you’ll be faced with a tremendous performer in Rolf Reynolds as Balthar. He can roll with the punches, no matter how much they bruise.

Did you see or rather experience this? Tell us your thoughts below. And is death this year's Fringe Trend?