The Saddest Girl in the World: trying to make connection 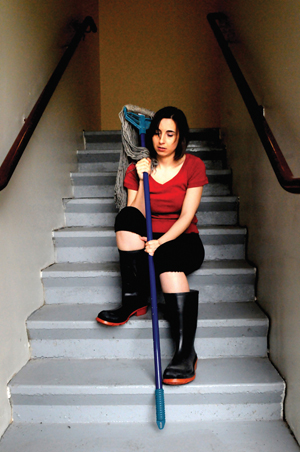 Ava is a naïve and idealistic woman with a penchant for putting all of herself out there and a deep love of glittery jewels. With a waning happiness and a sliver of desperation in every breath, Ava presents her story with startling poetic clarity. Ava is reaching for something that seems just out of her grasp. Physically we see her try, her voice so high as she stands on her tippy-toes each time she speaks. She can’t comprehend the idea of “glitter for money” the lesson Laura the overbearing, tri-hard manager of a high-end jewelry store tries to instill in her.

Nadia, the engineer from Kosovo who can’t seem to catch a break in her new home country, is tragic and funny and focused. She is irritated, she is pushed aside, but her will to try, because she doesn’t believe that she is a disposable citizen, is strong. As an engineer who can only scrape up a job as a janitor at a high-end jewelry store she is forced into a menial role and a solitary job. Nadia’s character has a rich story and we come to know much about her life in both her old and new homes. We are taken to Kosovo to see both what she misses and why she left. We ride the bus with her, watch her struggle through job interviews that go horribly wrong and listen to her conversations with her mother and husband, so far away. Her story is touching, but Nadia is not a victim.

Tina Teeninga is straight up amazing. Not only has she written a fantastic script filled with realism, beautiful language and original and engaging characters but as a performer she transitions seamlessly from character to character. Whether she is channeling Nadia or Ava, she is completely immersed, body-language, voice, every affectation and emotion is transformed. Even the minor characters, some of whom only appear once, are so well-drawn, characterized and portrayed.

With a delicate hand issues of bigotry are woven into the narrative, but not made the prime subject. The story of these women and their issues with loneliness and dreams and how to make others see them for the people they are is the focus. Both of these women are lonely and cope in different ways. Nadia has been coerced into loneliness and sees her situation as unavoidable. Ava is trying to fight it with everything she has by making her terrible new “dream job” seem better than anything she ever expected.

There is a touch of corny in the ending, but it also feels satisfying. We’ve watched these two characters suffer through their loneliness and a little corny suits them quite nicely.

If you have to see only one one-woman show this Fringe, I would tell you to see The Saddest Girl in the World. So, there, I told you. See it. It will make a few girls less sad.

Did you see this show? Let us know below.