Rove: The Legend of Rusty Point 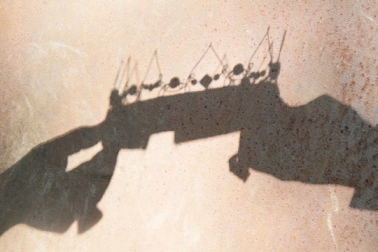 Brought to you by Tentative Equinox at the Sculpture Grove

“Rove” is a creative, site-specific piece which weaves two stories into one, but you only get to fully know one of these stories as they simultaneously play out, each with its self-selected audience. It is an ambitious script, which is well-realized with an impressive ensemble of 16+ actors and musicians, roving over the waterfront
boardwalk of Granville Island looking over False Creek. The script is part fairy tale, part psychological exploration (“a la” Jungian shadow) with a splash of good ol’ Vancouverite pride: part appreciation, part self-mockery of the “perfectness” of our highly livable city.

Several ensemble members stood out with their high-quality work: Corina Akeson, as the Narrator (Mother Goose) was extremely skilled (what a goose!); and, Christina Wells Campbell, as Eva, impressively carried the story arc I watched with believability and emotion perhaps because she was also the author and therefore knew the material from the inside. Many others showed skill and polish in their small parts (not to mention those who I never saw, as they were in the other story arc) even if sometimes the effort to create an air of “fantasy” seemed to flavour the acting with a touch of caricature. The two big risks: splitting up the audience into two, so as to intertwine two stories; and, integrating the environment into the storyline, both worked surprisingly well. The musical troupe, unfortunately, stood out a little on its own.

If you were lucky enough to be part of the Illuminaires Festival during its early years, when it was relatively unknown and it seemed like all your various neighbours were there and they all participated in their own way, you might recognize the same vibe from “Rove”. I enjoyed being part of this homegrown art piece and, if there weren’t other shows calling my time, would have returned the next night to follow the other story.