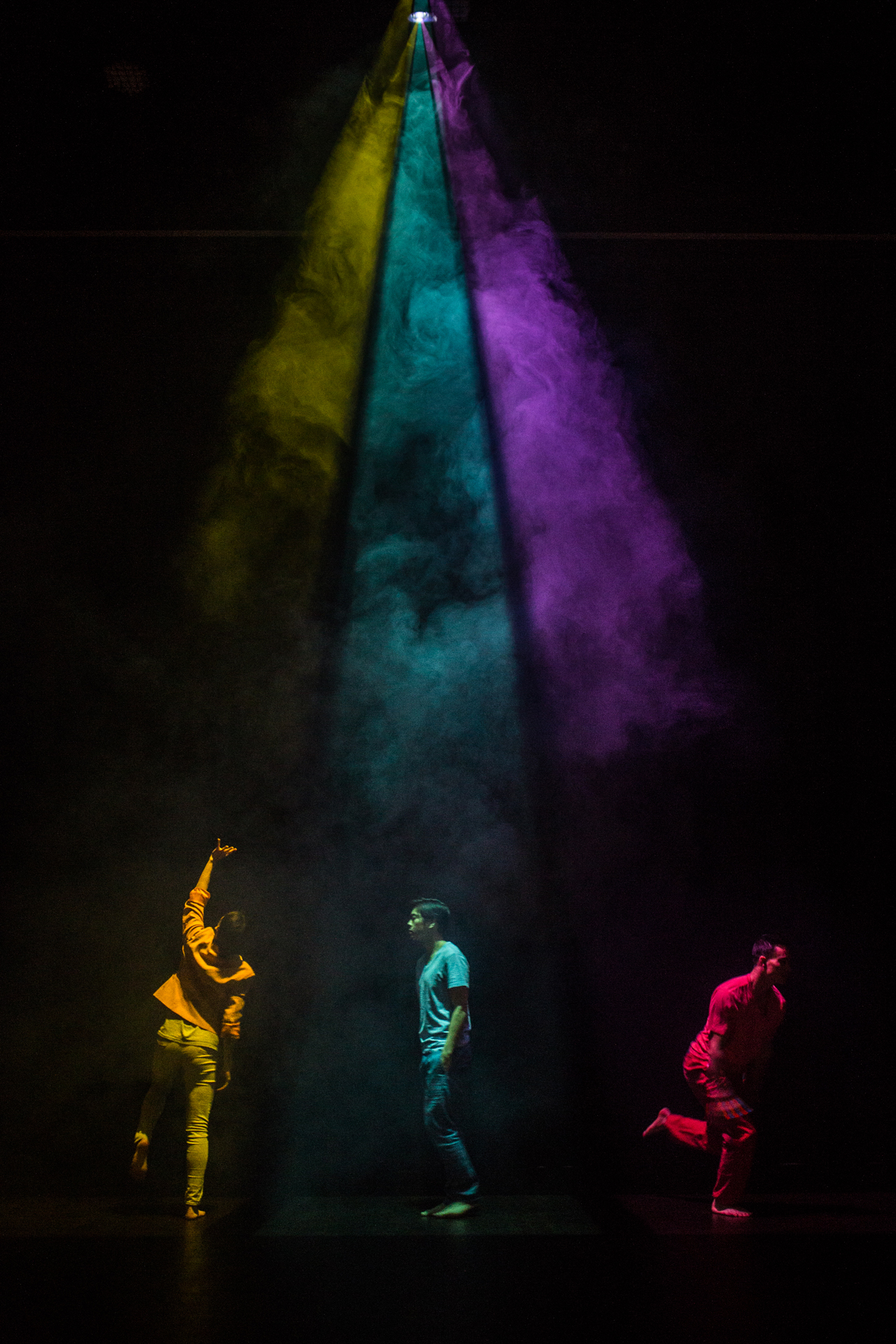 Hong Kong Exile describe themselves as an interdisciplinary arts company. They are three emerging contemporary artists: Natalie Tin Yin Gan, a contemporary dance artist specializing in improvisation and interdisciplinary collaboration, Remy Siu, an emerging composer, and Milton Lim, a director/designer and multi-disciplinary performer. They met at Simon Fraser University’s School for the Contemporary Arts, and they formed the company in 2011.

Hong Kong Exile are a new company to me and there wasn’t much publicity information about the world premiere of their Room 2048 run at the Firehall Arts Centre, so I had no preconceived notion of what to expect. As we entered the theatre the stage was dark and the room filled with a light fog. There was a definite air of anticipation in the audience of what was to come.

What unfolded over the next 50 minutes was a multi media show of impeccable class. This is a company that is full of confidence, and trusts in its ability to engage and challenge its audience. The lighting, an integral part of the whole performance, was slick and innovative. Fused with smoke it created curious environments and illusions. The music varied from Frank Sinatra to cheesy pop, and the soundscapes that threaded their way through the piece were intriguing and atmospheric, often bringing a darker edginess. The movement could be random, understated, and often perfectly poised in stillness. There was considerable, understated humour throughout which engaged the audience in lively laughter, who were keen to show their attentiveness and appreciation for what they were experiencing. The house lights came up, and the ushers opened the exit doors while the work was still in progress. It was a unique ending to an innovative and engaging performance that forced those in its grasp into a sense of the unusual and the uncomfortable.

This was a clever, fascinating, and absorbing dance piece that lingers in the memory long after the show has ended. Having watched many dance performances over the years I usually get a flavour of the meaning of a piece but this one eluded me until after the show. I often bring my partner to see dance and while he is no aficionado he read this piece like a book! Ricky was born in Hong Kong and moved with his family to Vancouver when he was about 14, so Room 2048 resonated with him and spoke to his own experiences. He recognised themes that represented fitting in, being seen or unseen, and feelings of isolation. He understood the visual interpretations of looking for identity in a strange land, and a sense of not being able to keep up in a new and changing, alien environment. He has had to repeatedly answer the kinds of questions that were asked in the witty narrated sequence. The questioner was barely audible so the full focus was given to the awkwardness of the responses, the likes of which are so often about revealing an identity. There is an amusing passage when one of the dancers, who is with a girl he met at a nightclub, starts to undress. He removes many layers of underwear before finally becoming naked (for a split second before blackout!) as if they were protective layers covering his true or naked self.

Room 2048 is a fine production from a confident company who know how to engage, and work an audience. It is an immersive audio-visual delight that will guarantee Hong Kong Exile’s following will continue to grow.