Ride The Cyclone: changes the course of reviewer's life 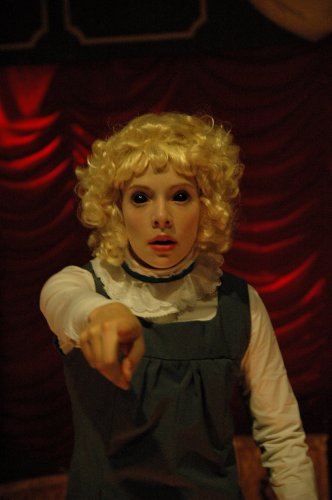 I’ve made a decision. I’m tying the course of my life to the fate of a musical. If Ride The Cyclone achieves the massive success it deserves, I will continue to work hard, seek wisdom and make sound choices. If it peters out and leaves its contributors on E.I., I will make all significant decisions on the basis of where darts hit the board. I’ll play Russian roulette. I’ll buy lottery tickets. Because if this show does not become a phenomenon causing obsession, there is no rhyme or reason in the world.

Producers the world over, pay attention to Atomic Vaudeville, the theatre company that Britt Small and Jacob Richmond started in Victoria, B.C. They are responsible for this absurd gift. With musical director Brooke Maxwell and choreographer Treena Stubel, they made the strangest, funniest, most touching new musical I’ve seen in years.  The story is narrated by one of those old carnival machines that tells the future. That and the giant rodent in the band oughta set the tone.

Karnack, the snarky, macabre fortune teller brings six choristers back from the dead to give one last performance. These high school kids from a nowhere mining town were killed when a carnival ride went wrong. You can’t call it a tragic accident, given the dead-end state of their lives. At least, they went out with bright lights.

Six strong actors deliver the catchy, quirky music and morbidly insightful lines with such energy, you worry about their molecular stability. The vocal standout is Rielle Braid, who plays the bright-eyed, bossy show-stopper, i.e. Rachel Berry if Sue Sylvester really did kill Glee. She might be straining muscles in her face with the ferocity of her smile. But Braid’s voice is well balanced with a range so wide and support so strong, she could probably traverse Canada in one breath. Elliott Loran plays the awkward, inhibited god among mortals with deadpan humour, a vibrant voice and solid piano skills. But it’s his dancing that dazzles – well, that and the costume stolen from Rihanna’s closet. Kelly Hudson is embarrassingly funny, poignant and riveting as the overlooked, overweight neighbourhood joke.

I’d like to buy everyone involved in this production a celebratory drink and find out what kind of trip they were on to create something so original.  If those lottery tickets pay out, I’ll call you.

Ride the Cyclone, an Atomic Vaudeville production, is on as part of this year's SummerWorks. For more information go here.