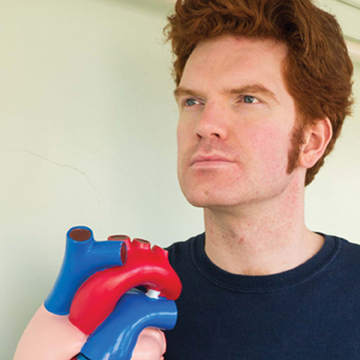 Although Colin Thomas in Georgia Straight faulted this show, with all due respect, I disagree. Jones, an Englishman and Cambridge graduate (as he points out three times), tells us how, a healthy young man of 30, he had heart failure - not heart disease - caused, he discovers, by a puzzlingly enlarged heart (so a pun on 'big heart').

On the screen before the start: "Has caused fainting: I'll warn you of squeamish bits," which he does twice, though no-one looked anywhere near fainting. He records, in a linear and sometimes emotional way, his many doctors, operations and hospital visits in London and Dudley, leading to his present apparently stabilized condition. We suffer with him (as when he is capable of only 2 or 3 steps) while always relieved by his physical presence in front of us.

This young man very nearly died, and is still in some danger, dependent on 9 different pills daily. His stage presence is engaging and I enjoyed his jokes. He warns us of bad puns, makes preditcable comments on pretty nurses (is angiogram going to be an Irish one?) and does a really extraordinary song stringing together medical ailments (he sells the script at the end, so we can read this). The show is also enhanced by animated cartoons behind him, of physicians and hospital rooms.

The moral is that we should all demand ECGs from our doctors. I rank this the most satisfying and enjoyable of the eight shows I have seen so far.