The Return of FUTURISTI!: laugh machine 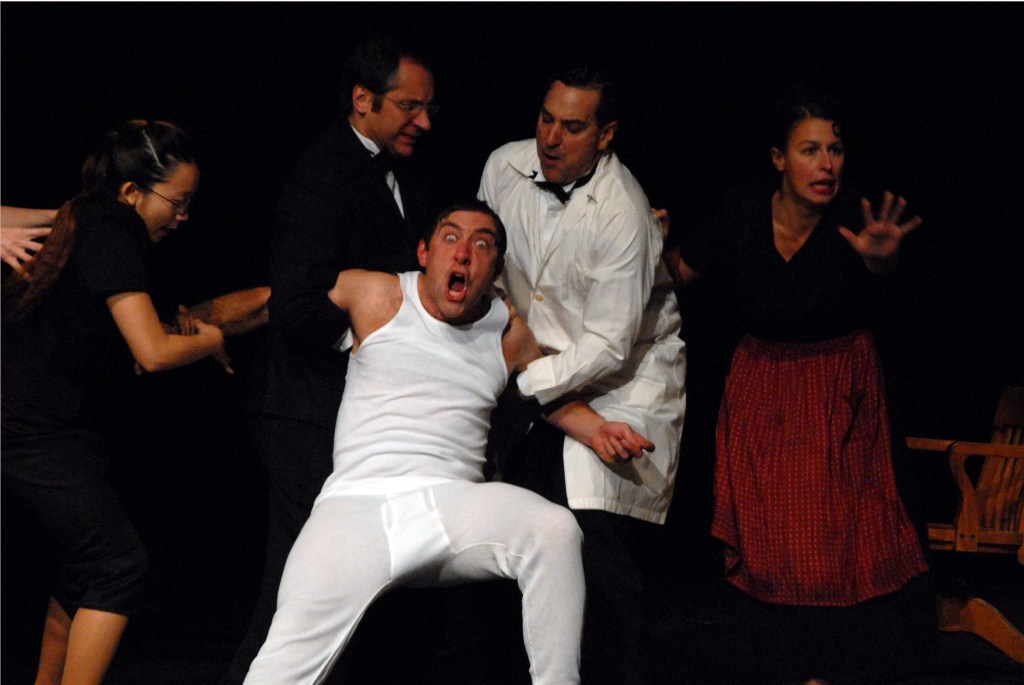 As soon as the lights dim, the red stage curtain performs a striptease, rising and falling flirtatiously. After this warm flush, a beautiful Italian woman invites us to use fax machines and cell phones during the show.

Before we know it, a wounded man in a leg cast miraculously rises from his crutches because he (mistakenly) sees a murderer – but there’s no resolution. This sintesi is over and the next one begins.

The show is Bella Luna's The Return of FUTURISTI! Futurism was an Italian avant-garde movement that started in 1909 and thrived until 1914 in its first form, then in altered forms in Italy, Russa and elsewhere until around 1940 depending which historian you follow. The Futurists were in love with velocity, machines, violence, hilarity, insanity and physical intensity (I've included the Futurist Manifesto below). As BellaLuna's cast careens through 23 sintesi – "small explosive playlets"– they explore each of those passions except for violence.

Machinery gets a shot at fame when a tall, slender, bag-billowy vacuum cleaner duets with a sturdy ballerina (Susan Bertoia). The human-machine love-in lasts and lasts, and oh! it’s a delicious union. The two lie down in graceful parallels, or twirl, or reach simultaneously for the heavens – until the plug is pulled.

One of the most physically hilarious, surprising playlets is when a male-female couple (Beverly Bardal and Marco Soriano) performs a loveyou-hateyou fight that starts with the actors at opposite corners of the auditorium. “Now I love you more!” “But you must never do that again!” they yell/I paraphrase. The two scream threats, throw kisses, promise adoration – and crawl across people’s laps as they scramble toward each other. A group of grade ten students from a local high school laughs hysterically while the gorgeous woman wiggles onto one young man’s lap and the male actor leads a pretty audience member into the wings – almost. The pitch of energy, and the fluid but muscular movement of both actors, is delicious.

Gorgeousness, too, is integral to The Return of FUTURISTI! because the physical is meant to supersede dialogue in this performance (and in the Futurist aesthetic generally). Director Susan Bertoia, one of BellaLuna’s founding members, confirmed that much of the “dialogue” throughout is in gibberish formed on Italian vowels.

This allows sound and movement to be the stars of the performance. To reveal the Futurists’ not-so-secret envy of machines, the humans become robots, or prefer streetlamps to the moon. And, in an elegant, panicked, mostly-silent segment, Joe Procyk and Astrid Varnes mirror each other’s actions while they arrange, rearrange and rearrange again, a formal set of dining table, chairs and place settings.

I learned later that this playlet, called “They are coming!” was Marinetti’s first piece of theatre for objects. Humanity, in his vision, was weak and should be replaced, even if only by furniture. Thus, the simple black and white costumes that all ten actors wear throughout, combined with the black eyeliner and perfect crimson lipstick on the actors’ whited faces, build a chromatic structure into the performance that simultaneously creates lusciousness and a semi-mechanical “uniform.”

Historically, the Futurists infuriated their contemporaries and adored war. I think of them as a group of hyper-masculine artists who explored every medium with an intensely creative drive – and who left behind muscular, animal-alive writings that inspire.

When I asked Bertoia about BellaLuna’s decision not to include the violent aggression or the Fascism that Marinetti later embraced, she explained that the through-line for their company was to move into the excesses of Futurism from the physicality and humour of Commedia dell’Arte (BellaLuna specializes in playing with this 16th-18th century Italian improvisational theatre that uses standardized costumes and stereotyped characters).

“We also chose not to make it political,” Bertoia said. “We wanted to celebrate [the Futurists’] work and put them on the stage.”

And the audience loved the show. After all, the twentieth century taught us a lot about the insanity of war, but it also showed us how the absurd and the ridiculous can be healing – a concept that would not have made sense in the Futurists’ time. So the discussion of how much historical context belongs around an aesthetic from another era is one to conduct in many experiments and over time.

BellaLuna wants to continue playing with Futurism. Last October, they presented FUTURISTI! - mostly the same sintesi but including a spoken word artist; new pieces this time include one of the short films plus two sound pieces. "If I had a budget," Bertoia said, "I would include live musicians on the stage."

In the now, BellaLuna embraces the Futurists’ body-poems and they wrestle madly, wonderfully, with the pulsing life of it.

1. We want to sing the love of danger, the habit of energy and rashness.

2. The essential elements of our poetry will be courage, audacity and revolt.

3. Literature has up to now magnified pensive immobility, ecstasy and slumber. We want to exalt movements of aggression, feverish sleeplessness, the double march, the perilous leap, the slap and the blow with the fist.

4. We declare that the splendor of the world has been enriched by a new beauty: the beauty of speed. A racing automobile with its bonnet adorned with great tubes like serpents with explosive breath ... a roaring motor car which seems to run on machine-gun fire, is more beautiful than the Victory of Samothrace.

5. We want to sing the man at the wheel, the ideal axis of which crosses the earth, itself hurled along its orbit.

6. The poet must spend himself with warmth, glamour and prodigality to increase the enthusiastic fervor of the primordial elements.

7. Beauty exists only in struggle. There is no masterpiece that has not an aggressive character. Poetry must be a violent assault on the forces of the unknown, to force them to bow before man.

8. We are on the extreme promontory of the centuries! What is the use of looking behind at the moment when we must open the mysterious shutters of the impossible? Time and Space died yesterday. We are already living in the absolute, since we have already created eternal, omnipresent speed.

9. We want to glorify war - the only cure for the world - militarism, patriotism, the destructive gesture of the anarchists, the beautiful ideas which kill, and contempt for woman.

10. We want to demolish museums and libraries, fight morality, feminism and all opportunist and utilitarian cowardice.

11. We will sing of the great crowds agitated by work, pleasure and revolt; the multi-colored and polyphonic surf of revolutions in modern capitals: the nocturnal vibration of the arsenals and the workshops beneath their violent electric moons: the gluttonous railway stations devouring smoking serpents; factories suspended from the clouds by the thread of their smoke; bridges with the leap of gymnasts flung across the diabolic cutlery of sunny rivers: adventurous steamers sniffing the horizon; great-breasted locomotives, puffing on the rails like enormous steel horses with long tubes for bridle, and the gliding flight of aeroplanes whose propeller sounds like the flapping of a flag and the applause of enthusiastic crowds.

Standing on the world's summit we launch once again our insolent challenge to the stars!