A Quiet Place - Dark and Deep 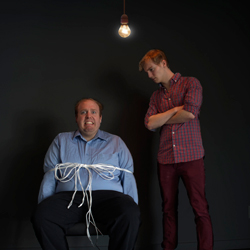 A minimalist play with only one prop, A Quiet Place relies on its ability to create a sense of pacing through only the motion and dialogue of the two actors. Mark Manning and the delectable Tosh Sutherland are both well-practiced, with depth and charisma to spare. Together, they bring to life a harrowing and enticing performance.

Henry, played Tosh Sutherland, is the in-control one. He's been in the doorless room longer and has grown accustomed to it. He seems to feed on the nervous energy of David, played by Mark Manning, to anchor himself, growing more calm and focused in the moments when David is most out of control. With no point of reference outside the room, the characters toss and turn in how they handle their situation, and we see some interesting reversals of this dynamic.

One might think that the premise — two people in a room with no exit — would make for boredom and existential meaninglessness à la Waiting for Godot. It does go there, but as the relationship unfolds one finds that the story hinges on control. The characters are constantly trying to one-up each other on knowledge of the outside world even though this information is irrelevant, and its pursuit absurd. Even though lies are indistinguishable from truth in their setting, each character tries to find security in appearing smarter, more ‘correct,’ than the other.

One device that makes for some awkwardness is the ‘clip show’ format. The script breaks the tedium with a series of time jumps: a scene ends, the lights go dim, and the light returns to reveal the characters in new positions and a new context. The only difficulty is that audience members can still see the characters’ silhouettes and hear their body movements during the transition. Any suddenness in that interim moment is noticeable. I found myself taken out of the performance when an actor abruptly dropped out of character to reposition himself. I saw a similar device executed more effectively in the same venue in the performance of Pornography. In that play, lone or paired actors freeze in place onstage while the focus shifts to a different set of characters. Perhaps because they expect to be seen, their transition from animated to frozen is more graceful.

This show is full of twists and turns and inevitably takes on a different shape than one expects. Both actors display a profound emotional range, and the dialogue is crisp and sharp.

I highly recommend this show to anyone who likes existential horror or a solid two-hander.