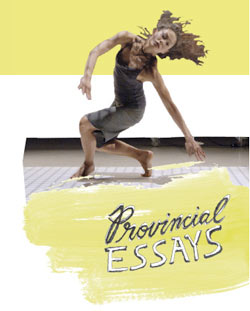 Provincial Essays seems an odd title for a work of contemporary dance: it evokes pastoral traditions, and vaguely suggests the image of a public figure-of-note in his or her sunset years retiring to the country to write memoirs – indeed, the original essays by Montaigne were a grab-bag of reflections on everything from diet to politics.

In Lola McLaughlan's Provincial Essays a sleepy pastoral backdrop proves the ideal setting in which to explore human and natural relationships, and the work does so with a subtlety and keen insight that belies any preconceived notions of parochialism.

Provincial Essays earns its title in part from its structure: the work is conceived as a series of loosely related sketches – essays – or as the program says “an eclectic collection of choreographic landscapes.”  The stage is minimally but dramatically appointed: the floor is white, the back wall is covered in a white screen, and standing on tall silver tripods are three enormous rectangular flood-lights whose faces are covered in frosted paper. As the work begins, a woman enters with a microphone. In a thin voice she declares the name of each movement: seedpod in the wind; spaghetti girl; the heron; branch with fingers; the ape walk.  Each is followed by a gesture that is lyrical and brief, yet strongly reminiscent of the title.  Gradually, her voice is replaced by several recorded speakers who rhyme off strings of evocative words accompanied by gentle piano: mucus, skull, yolk – iodine; rain, pewter – velcro, skull, beetle – slaughter. Four women enter and dance in unison while carrying green bundles of willows. The list gets longer and more cryptic. Words are scattered like drops of rain.

This sketch is followed by the entrance of a man with a broom – a sudden human presence amidst this myriad of textured objects.  This is followed by a narrated sketch where the audience is asked to imagine a waterfall while three women dance – and suddenly a waterfall manifests on the back wall, as if produced by the will of the audience. A vignette called “The Bird Group,” where dancers strut and step delicately over the stage is prefaced by the appearance of a bird projected onto the white face of one of the flood-lights. “Seascape” is a series of linked movements each named after something ocean-related – and these titles are listed by a narrator as the dancers make the motions. The scenes shift rapidly – a series of ghostly mirages – but their common thread is this focus on minute segments of dance, on humorous wordplay, and on the ways that dancers' bodies create images in space which, in turn, are linked to images created by projection, voices, and music.

Yet for all its naturalism, Provincial Essays does not describe an isolated natural space – the work embraces a human presence: we also see a man move slowly, with great difficulty across the stage, as if walking into a headwind and the setting for his slow-motion progress is the projected image of the grassy lawn of an institutional building.  A woman dances against a wintry blue sky, and though her sassy jazz-style motions might belong in a club, they seem somehow more vivid, more pure, in this sparse setting. Two dancers perform a quirky duet to the harsh sound of grinding stones, and though their splayed knees and feet emphasize the comical aspects of the human body, their rhythmic movements somehow complement the soundscape. Occasionally the essays take a sinister turn.  Dancers make leggy, delicate movements to the sound of frog- and cricket-song, illuminated by bands of green light. Slowly the greenspace narrows into a white square, and a dancer thrashes blindly, like something wild caught in a cage, before subsiding on the floor. It is a poignant reminder of the fragility of life.

Provincial Essays is not simply about nature: it is about dancers attentively examining facets of their environment and, muscle-by-muscle, breath-by-breath, painstakingly transposing these onto the stage.  The audience is invited to look closely at the dancers, at their movements, and at the small and intricate things that are their inspiration. We are carried to a place that is interwoven with the natural but where human social context is acknowledged and accepted. Even in darker moments that express struggle or loss, it is a space that is humane, introspective, and strangely gentle. In this context the traditional-sounding, vaguely nostalgic title of the work takes on a fuller meaning: there is a sense of fullness, of rootedness, of homecoming. The accessibility of the work, its cyclical elements, its focus on things that are small and diverse, together create a sense that all life is simultaneously awkward and graceful, that it all belongs.

Provincial Essays is slow and deceptively simple, but it accomplishes something powerful with its persistent focus on small movements and singular ideas: it deconstructs its own foundations, revealing to the audience the meaning and the magic at its roots. Every time a dancer names a series of movements, it is as if she is saying to the audience “look, it's not that hard, we just follow the steps.” Rather than diminishing the evocative power of the gestures, this draws us deeper, and places us more fully under their spell: now we are looking for the seascape in the footsteps; the ape in the woman's rolling walk; the birdsong in the dance.  The result is a haunting work that leaves traces in the mind's eye long after the lights on stage have faded.