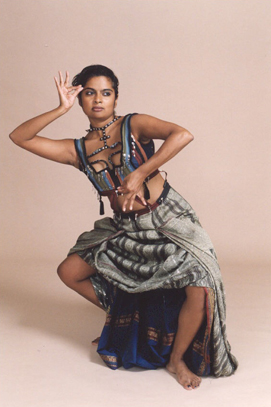 Finally: this is where "bharatanatyam":http://en.wikipedia.org/wiki/Bharatanatyam is going; this is where it has a future as a contemporary dance form. In a city as diverse as Vancouver, with such a large South Asian population, why has it taken me so long to see a successful contemporary version of this form?

For those unfamiliar with this exquisite form of classical Indian dance, bharatanatyam is steeped in centuries of tradition and mythology. From what I’ve seen, and from the little I know of it, bharatanatyam seldom lends itself well to modernization - not only is the movement incredibly symbolic and sacred, the structure of the guru-student relationship is often set up in such a way as to make it gravely disrespectful for students to break from their teacher’s style and choreography. To be taken on as a student is to enter into a life-long relationship of learning with a particular guru and their technique, which they in turn learned from their guru in a lineage that stretches back through time.

I’ve seen a lot of bharatanatyam, and I’ve seen some great dancers. During my brief period of working with Mandala Arts and Culture, a Vancouver-based bharatanatyam company, I grew to deeply appreciate this form, but from what I’ve seen so far in Vancouver, a contemporary take on bharatanatyam often only goes so far as to have dancers in casual dress.

Given my admittedly limited knowledge on this subject, I invite anybody better versed in classical South Asian dance to refute me on this point. I’m quite willing to admit that there may be better fusion work being created in other parts of the world, but what I’ve witnessed in Canada never quite manages to take enough of a daring step into our current millennium. From discussions I've had, I’m aware of the considerable dialogue in the cultural dance community between preserving a centuries-old form and turning it into a modern expression of movement.

It was with this significant discussion in mind that I watched *Primary View*, a collection of works choreographed and performed by "Nova Bhattacharya":http://www.ipsitanovadance.com/.

First and foremost, Bhattacharya is a formidable dancer. Her movement is articulate, clear and defined. She is as steady and strong as an ox but also as fluid and sinuous as a snake. She is truly amazing to watch. But more importantly, this is the first time, for this humble reviewer, I've seen anything quite like what she has to offer. Bhattacharya manages to keep the essence of classical bharatanatyam and blend it seamlessly with contemporary movement. The movement was softer and more flowing than traditional bharatanatyam, and lacked traditional elements like ankle bracelets with bells, but retained the essential form of the postures.

The fusion of these two forms triggered differing thoughts for me. On the one hand, the movement was new and appealing – I felt like it triggered synapses in my brain that hadn’t seen any action in a while. On the other hand, the symbolism inherent to the movement in bharatanatyam is designed to tell a clear story, whereas modern dance is more impressionistic. Although the movement was compelling, I felt its intent got lost in translation – I didn’t feel there was a clear purpose for the pieces except for the last one, where the simple addition of an empty chair and a man’s shirt as a costume was enough to generate a deeper meaning for me. Although the other pieces were beautiful to watch, there didn’t seem to be any purpose other than an exploration of movement. All I got was a sensual sense of longing, but for what? Or whom? It almost came too close to that type of overplayed I love you/I hate you drama that is common to bad dance.

Of course, this is where the fact that I’m not a dancer really plays out here, and is likely to irk any movement artists reading this review. As someone interested in performance without having a technical background in dance, it isn’t enough for me to simply watch the beauty of the movement. My companion for the evening, herself a dancer, _loved_ this show. She was fired up and inspired after seeing it. Although I enjoyed it, I was left craving more. I need there to be a bigger creative vision for me to really enjoy a dance piece, and unfortunately I felt the majority of *Primary View* was lacking in this vision.

That being said, I still feel as though Bhattacharya has a lot to offer, and I look forward to seeing where she will take her work in the next few years. There is a lot being presented in her work, and I can only hope that the creativity and uniqueness of the movement will eventually find its way into the bigger schemes of her presentations.