The Power of Ignorance: too powerful to ignore 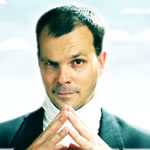 Victoria: Chris Gibbs is a veteran solo performer, most recently seen in Victoria when he brought his Antoine Feval character to the UNO Festival. He now  brings his "best of show", the Power of Ignorance, back to Victoria (it has been staged as part of UNO Festival as well) and it is a tremendous achievement in comedic solo performance.

Gibbs plays Vaguen, a self-proclaimed Igmaster, who is presenting a seminar that is committed to making the audience as blissfully unaware as he is.  But there’s more than meets the eye to this “Colbert-esque” character; something that’s impossible to ignore - no matter how hard he tries to make his seminar attendees/audience.

This show was held over in Edmonton after a wildly successful run, and rightfully so. On its opening night here, the show was pretty much sold out.  Filled with puns, intentional mispronunciations, double entendres and disjointed craftsmanship, this production is exceptionally well-written. The audience was in stitches throughout, and with his occasional foray into audience participation it kept them wholly engaged. There were plenty of sight gags - some of which demonstrate Gibbs’ gift for physical comedy - and he even took jabs at the wisdom of the recent funding cuts (“Those behind these decisions have clearly been to this seminar before”), illustrating his ability to be playful with both the audience and his own script.

Sure, the show ran long…but no one really cared.  By the time the dust settled, Gibbs was impossible to ignore even as the audience left the theatre.  The Power of Ignorance is a must-see - it’s too powerful a show to ignore, even for a budding “ignoramus.”