The Power of Ignorance: profoundly stupid (and that’s a pretty good thing) 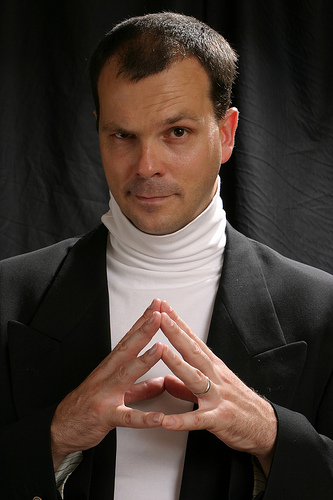 Chris Gibbs in tune with his inner ig.

If you kept your ears open around last year’s Fringe festivals, you probably picked up a shred of conversation or two about Chris Gibbs in The Power of Ignorance which is back in Victoria for a return engagement at the Uno Fest. Gibbs plays idiot-savant motivational speaker Vaguen – here to teach you (!) no less than nineteen (!) ways your ignorance (?) can save and better your daily life.

From the first line Vaguen is a send-up of the charismatic, self-help gurus, armed with a sharp suit, jargon and pop-pseudoscience – all that’s missing is the law of attraction. In its place, Vaguen peddles the titular power – embodied in its magic mantra of “Duh…” – which promises everything from superhuman strength to memorable first meetings (accomplished by assaulting new acquaintances with their own name). While charming and composed as can be, Vaguen lapses in and out of malapropisms and sincere falsehoods. “A full 350 degree turn!” Vaguen insists we make. Rounding out the clown show is Vaguen’s perpetual punning, boy-band dancing and the peculiar relationship he has with his handy glass of water. The humor is shallow but intentionally so, and the delivery is riotously dry.

The script peters out at around the halfway point, once Vaguen starts engaging the audience with his riddles of ignorance. Time and timing are vital to comedy. If a joke takes too long to set up, it’s hard to make it pay off. Vaguen milking the audience for wrong answers, even when offset with jabs at their expense, doesn’t compare with the Gatling-gun pace of the first thirty minutes. The nonsense punch-lines to the riddles feel cheesy; silly but not satirical. The riddles are followed up by an accidental self-hypnosis which likewise doesn’t return on the audience’s investment, so to speak. Again, it’s just silly, lacking the wit and wordplay that made the first half so clever.

Once these long stalls are quite literally forgotten the script returns to form, but doesn’t quite recapture the edge it started with. The ending is somewhat unsatisfying, though Gibbs stays in character even after the lights come up, which is a nice touch. With disbelief suspended, the show ends because the seminar does; unsuspended, it ends like a sketch comedy bit does, which would work perfectly if The Power of Ignorance was shorter. If the show were a half-hour to forty minutes, say, of its best parts, the quick and dirty comedy could carry it all on its own. Once we hit an hour, though, parts of the audience start wanting something a little extra to justify it, and Vaguen’s dark and depressing past can’t really be fleshed out enough to do it.

People laughed often, though, and the applause at the end was sustained and sincere. The show certainly garnered good reviews at last year’s Fringe. Critical as he is, this reviewer still had a pretty good time. If you want a few good laughs – and to vastly improve the quality of your life (!) by mastering your Ig – The Power of Ignorance has one more show: 7pm on Friday the 28th.

And it's part of the Uno Fest which is on right now in Victoria. You can find out more here.