Townsville - the elephant in the room 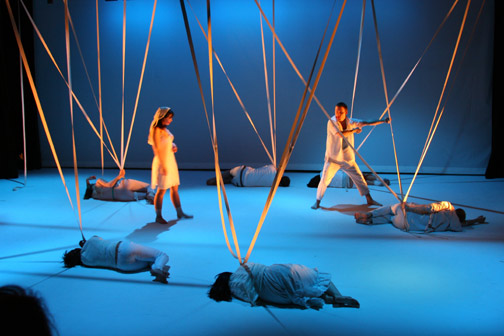 All the previous Magnetic North Festivals have featured a production showcasing the students and emerging artists of the host city. This year, it’s the turn of Vancouver’s The Chop Theatre in a co-production with Studio 58, Langara’s well-regarded theatre program. The Chop are probably the coolest of the younger generation of theatre companies in Vancouver.

While they are probably best known for the Patti Fedy plays that were huge Fringe hits, it is their more recent work that is most interesting, including 2 Truths + 1 Lie = Proof (presented by Rumble at the first HIVE) and Last Dance Tango Salon (which was a “showoff” production at last year’s Tremors Festival). Both shows caused a stir at their respective events and played directly with notions of audience/performer interaction and the construction of narrative, as well as making subtle use of technology. Last Dance was actually more memorable than the mainstage show it was “supporting”.

With its big cast and more traditional staging, Townsville is a move right away from the intense intimacy of The Chop’s previous works. An earlier version of the play was presented during Studio 58’s just concluded season. During a talk-back session on the night I attended, Anita Rochon, the chief writer on the project, revealed that approximately 50% of the play had been rewritten from the Studio 58 version and that the production we’d just witnessed had been pulled together with the equivalent of seven days rehearsal time. Even by Vancouver’s infamous measly standards, this is a phenomenal achievement.

One of the significant changes was the introduction of the character Arial (Ella Simon) who comes to Townsville looking for participants for a talent competition. This competition is actually the third narrative set up device used in the play. At the top of the show we are introduced to the idea that we are watching a group of young people “putting on a play” (a conceit that is never returned to) and we are then introduced to the town of “Townsville” which has a mascot, an elephant named Sylvia, who is sick and dying. Each of these set ups, takes time to, well, set up, so that a large portion of Townsville is devoted to introducing narrative devices (in fact, the talent show gets two set ups, one for the talent search and the other for the show itself). The biggest problem with all this setting up: the narrative never gets full traction, and we always feel like we’re at the beginning of something.

This sense of always starting is further reinforced as the young and beautiful residents of Townsville introduce themselves or each other through direct address to the audience. It seems that the majority of these character sequences were actually created by the performers themselves (with Rochon providing the framing structures) and tend to be the usual mixed bag of student-created work, with Rachel Aberle’s excellent “the town is sleeping” an obvious stand out for me. This use of student-created material would seem to have been embedded within the concept of the project. I’m not sure whether this was The Chop’s innovation or whether it was because the project was linked to Studio 58’s own student-creation series. I can see how The Chop – with their interest in different narrative forms – might want to rest individually created narratives within a broader context but often these vignettes, which are mostly naturalistic, sit uneasily, at least for me, within the rest of the piece, which is highly stylized and includes some snappy dance number choreographed by Chick Snipper.

The set of Townsville is beautifully simple. Maybe twenty evenly spaced, thick bands of elastic hang down from the ceiling. These elastics made me think of the tethers that keep an elephant under control. In a sense, Sylvia really was the elephant in the room; one that was too often ignored. Of all the narratives, the elephant is easily the most compelling and original. Handled correctly, it could be sublime – and we catch glimpses of it in Rochon’s writing and in some of the performances around the invisible (to us) pachyderm. The death of a mascot that embodies the collective sense of identity for a community is so filled with potential that I hope Rochon and director Emelia Symington Fedy return to it.

With its coffee shops and tennis playing, Townsville appears to be a satire on the young, beautiful and empty-headed of Vancouver. There is another striking parallel between Vancouver and Townsville that could also be made. Just as Townsville over identifies with an elephant so, I fear, Vancouverites over identify with our natural setting. The death of Sylvia should have had a similar impact on the residents of Townsville as, say, the loss of the mountains would have on Vancouver. Imagine if they disappeared tomorrow. What would the impact be on us collectively? How would each of us cope with this great hole in our lives? What is Vancouver without those mountains?

And how does a beautiful and dumb community respond to a natural disaster? One only has to think back to our reaction over the trees that were blown down in Stanley Park two years ago.

It was estimated that the same number of tress were blown down as there were homeless on the streets of Vancouver. Within days a telethon was put on (not too dissimilar to a talent contest) and millions of dollars was raised for the trees.

The homeless are still there.

In terms of the dumb and the beauty, Townsville is on the money. It just needs more bite in its satire.