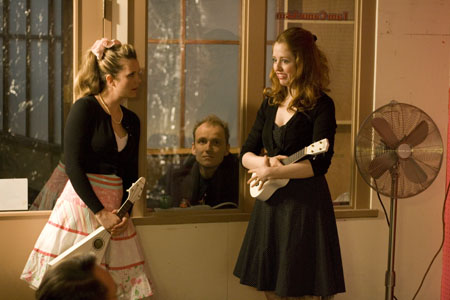 Anyone who is vaguely interested in attending HIVE2 should go, at once, and not read anything about it before hand. Don’t even let anyone tell you what they saw there last night, and that includes this review. The next paragraph is safe, but the one after that should be avoided, along with all that follows.

HIVE2 is a group of eleven site-specific, short works (5-15 minutes), all performed in different spots in an old factory. Each has been created by a different West coast theatre company. HIVE2 depends on surprise, and particularly on the audience's surprise at the different spaces in which the eleven playlets take place. In most cases, once someone has described each space, they have described the best part of each production.

The audience becomes a wayfarer, meeting up with both scheduled and unscheduled experiences. Walking from one show to another in the former industrial place now called "the hangar", you may come across a stage manager telling two actors inside a large cardboard box: "you're freed once more!" Small clutches of people are being led off in different directions, coming from or heading to experiences you can't guess at. On your own travels you will pass by curious structures: entire, separate rooms built in the middle of the hangar, created for shows you don't know, and will arrive at only by chance. As the night wears on, once-indefinable areas clarify themselves in your mind as performance spaces you've been to already. Outside one of them, you see an actor cueing up for her entrance, the one she did for you twenty minutes ago. Backstage and onstage have merged; now you're in the audience chamber, now you're an actor, now you're in the wings.

In a single night I saw six of the mini-performances. At one of them I was a new employee, standing at an assembly line in a small room with 12 others and a personal piano player. To see the show, I actually had to have a job interview (am I good enough for your theatre? is not a question an audience member usually asks herself). More disorienting was a tiny, sweat-spiced room with the cosmos on the ceiling and the mirrored floor, and grass outside the door. More intimate was a space draped in blacks, into which I crawled and lay flat on my back to see up a well shaft, a clown's nose, and an angel's dress. At another show I stood inside a cardboard box, locked into a cardboard stanchion, face forward, like a cow. By the end of the night, I began to feel that the entire hangar must have more than three dimensions. I'm still not sure where I went to see the Electric Company's show, but I went somewhere, and it was real, I'm almost sure.

There is some evidence that the audience brings a good portion of any show with them. Our anticipation of an event (positive or negative), is often the primary predictor of how much we will enjoy it. At HIVE2, the eleven theatre companies have gone to enormous effort to create plays in these unconventional spaces, many of which were built from scratch for the show. The actors are working like mad to repeat the same 10-minute performance 12 times in one night, for 12 different audiences. And still, the success of HIVE2 depends a lot on how much energy and excitement the audience brings – and how much surprise.

It's both a play date that depends on how good the toys are, but also a party that depends on how high the guests get. And despite the evidence, expectations almost get in the way. There has been so much buzz about HIVE2 and the anticipation is so high that on Sunday night, (the end of the first week's run), I sometimes felt the audience was waiting for the experience they'd heard so much about, and not quite finding it. That's not HIVE's fault, but it complicates the experience of performance. I was reminded of the program notes on Shostakovich's fifth symphony at the VSO that same weekend: it was as if people were telling themselves "our business is rejoicing; our business is rejoicing," and not quite able to carry it off.

At its base, HIVE2 is a big party for adults who want experiences they haven't had before, as if by now in the history of theatre we can't possibly be amused by anything predictable or anything that doesn't touch us personally, and I mean touch us physically. There is a great deal of interest in site-specific theatre in Vancouver, the theory being (in part) that these unusual and intimate experiences highlight the differences between movies and theatre. No movie can take you physically into a cardboard box. Only live actors can do that. Experimental, site-specific theatre also fits well with the long performance art tradition in Vancouver (some of which was also on display at HIVE2).

This isn't deep theatre, though. With the exception of Theatre SKAM and the Electric Company, the six shows I saw didn't really make an attempt at meaning. What lasts in a 5-10 minute piece aren't the stories or the ideas, but scattered images and experiences. You have to make hard choices about what to cover in a theatrical piece that short. An image, an experience, a story, an emotional change in the viewer – all these are possible, but each is more difficult than the last. HIVE3 will be even more satisfying when the story and the acting are as essential as the space in which the plays take place.