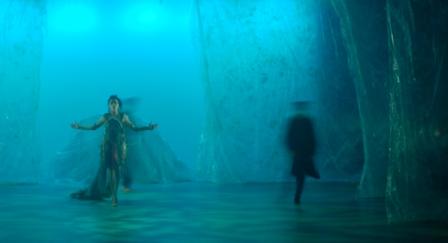 For me, the success of April 14, 1912 hangs on two death scenes. One is of a man, the 1st Marconi (telegraph) Officer on board the Titanic (Matthew Romantini), drowning in the sea. Both legs and one hand are on the bare stage floor, but the rest of his body is convincingly in an environment hostile to human life. And he surrenders to it at last.

The second death scene feels about 12 minutes long, and in a 60-minute piece, that's forever. A woman in the remnants of a sea-green gown, covered in barnacles and dripping seaweed, slowly, agonizingly, sinks to the ground. And then she gets up and does it again.

There is so much about this piece of theatre that should not work. The story of the Titanic, which sank in 1912 with the loss of 1500 lives, is a very familiar one. Many of us have seen the movie, read the first-hand accounts of survivors, maybe even seen the original deck chairs that survived to take up residency in ghoulish museum exhibits. I remember being aghast at the Titanic story as a child, but I'm not particularly drawn to hear more about it now, and wonder if we don’t have other stories we need to tell.

There is little new insight into the tragedy in this production. Although the script is largely based on 2nd Marconi Officer Harold Bride's original words (performed by Patrick Connor), drawn from testimony he gave at an inquiry into the sinking, his speech doesn’t provide a rich or multi-layered script for a theatrical work. Even with time changes and memory lapses, it is a fairly straight-forward recounting of a disaster. Essentially: We were on this ship; it sank; some people died, and I survived. If this were a new story, a simple first-hand account would still feel rich; but as we know the Titanic legend so well already, the text for April 14 seems thin.

That's not the only problem. There is also the set, which is really some drapes made out of plastic sheeting, and a white plastic triangle that's clearly meant to be an iceberg, but which is pretty much ignored throughout. It takes a slight effort of will to accept the set, although the effort was far less than I expected when I first saw it. The production itself is a hybrid of dance, physical theatre and traditional text-based acting. Oddly, despite this blending of disciplines, the overall effect is of a stage that is almost empty (as is often the case with dance), and a story that is almost empty (ditto), with choreographic gestures that sometimes speak a vocabulary I don’t share (my frequent problem with dance), but actors who speak lines and explore relationships through dialogue (as in theatre). The dance world aesthetic dominates in a piece that presents itself as a theatre, leaving the audience unsure of what to expect.

There is also this sinking woman to contend with: her hair wild, her gown torn, and her insistence that we sit there, after nothing very much has happened at all for the entire play, and watch her die in slow motion. I had already noted my own vague impatience at times throughout the piece, thinking "surely this can't be all they're going to do with this material?", and then realizing, as the ship sank, that it was.

Still, as the woman in the torn gown, the sea-green Titanic, sank slowly before my eyes, I became aware of the lighting for the first time, which I could not describe for you as it was oddly indistinct, but also pearl-beautiful. It created some strange world halfway between heaven and earth or maybe between dry land and the bottom of the sea. I looked at the faces around me in the audience, which were still and intent, watching the sinking ship with the stage's pearl-glow on their cheeks. And when the lights faded to black, no one moved or made a sound at first. We all knew it was over, we just weren't ready to leave the moment.

All of which makes me wonder what I mean when I say a piece worked. What shouldn’t have worked is the topic, and the text, and the set, and the dancerly movement. What shouldn’t have worked is the scope. There isn't much to April 14, 1912; it was a small work in many ways. But I was tired and needed a way to lift above the day. And so I surrendered to the work in the end. For a brief moment as the lights faded, I felt grateful to Theatre Rusticle.

My willingness to surrender to a play depends partly on how much I trust the production. There are so many ways an audience can be manipulated. I know the music used in this production (Satie, Lehar, Part, and Billy Bragg, among others) affected my experience. Any work using music that strong will automatically borrow from its power, whether or not it has any of its own. I also believe the lighting influenced me, although I wasn’t aware of it until the end, and no doubt there can be fantastic lighting going on when there is nothing else of value on the stage. But in this case, the post-show chat solidified a vague feeling I had that the actors believed in what they were trying to do, and I had instinctively trusted them. Their own trust in the Director (Allyson McMackon) and themselves seemed strong in the conversation. That honesty and trust communicated itself to us during the show.

When actor Patrick Connor spoke about the rehearsal process, he talked as an actor who had been used to working in script-based productions, and had to learn to mean his lines in his whole body, and not just mean them in his face and voice. I think I saw what he was talking about. The man who drowned so convincingly meant every second of it, all through his body, and believed we would understand his gestures; the woman who drowned so unrealistically believed in her gestures and movement, and that we would wait for her. And that night, they were both right.

"She was so beautiful going down," Harold Bride says. It's not what you would expect a survivor to say about a great ship sinking with so many people about to drown. In that phrase, I felt the love Harold Bride had for the ship, in 1912 and ever after. I would still prefer a theatre of ideas, of intellectual and emotional necessity. Theatre Rusticle doesn't quite give us that. But in the absence of the theatre I hope for, I will watch that ship go down.

PS: I think this new trend at Vancouver festivals of charging full price for very short performances that start late in the evening needs to be stopped - but that's a separate discussion.