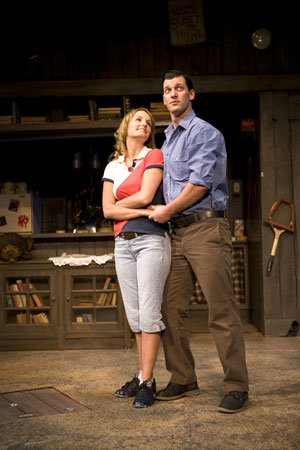 Lynley Hall and Tyler Rive are part of Evil Dead: The Musical, the one at the Vogue not the other one

Your PLANK Panel making sense of the blood and guts that is the Ground Zero (aka The Vogue version) of Evil Dead are: Michael J Unger, Sean Tyson and Franklin T Schneider.

MJU: Initially our requests to review the Ground Zero production of Evil Dead: the Musical at the Vogue were ignored, so when I reviewed the Down Stage Right Production of Evil Dead at the Norman Rothstein, I wasn't expecting to be able to compare the two. The most intriguing part of this whole Evil Dead vs. Evil Dead thing is how much of a war it has turned into. I must admit that I did get caught up in it a bit, but I guess that's a lesson to be learned for companies that do simultaneous productions of the same play, and for reviewers that review them. It kind of felt like when I was in high school and the rival school decided to do “Annie” a year after we did. I mean, even that seemed controversial*.

The existence of two productions of an anticipated new play creates confusion for the discerning theatre-goer. For the casual theatre-goer, because of the advertising, there's only one production and that's the one that's at the Vogue.

Tyson, you saw both productions. How did you feel about this whole situation?

Ty: thanks Michael. I have to disagree with all the negativity about this situation. I think it’s a great thing for Vancouver to experience. With the DSR closing this weekend and the Vogue crew continuing on to decent houses it shows we can draw enough of a crowd in this town if we know what the “casual theatergoer” wants to see. I think we can all learn something from what’s happened and I don’t anticipate a repeat anytime soon. I mean…

FTS: Hey MJU how’s it goin'? FTS here and I couldn’t help stepping on Tyson’s toes to get in on this little debate…  do you guys really think the story should be about who screwed who over the barrel when we’ve got enough BS goin' on right now?!

We got other people out there jabbin' on and on about the war…  I say there’s no army worth fightin' over this.  Unless…. It’s the army of DARKNESS! And I’ll tell you who they’ve employed to get their sly little dirty tactics out there first. Kevin McKendrick! That’s right kevvy boy… I’m callin you out! You say you’re a “full fledged Deadite”…  Please!

You said you were inspired by the Toronto production but this is your “own original production” where you felt “much more could be made of the story and Ash’s struggle to overcome the forces of evil and destruction”… did you think you had discovered Shakespeare in a Joan Collins novel?! “WTF was that?”   It’s not a drama. It’s a brilliantly campy horror film trilogy from the 80’s and 90’s that was given new life in a musical! This also begs the question: WHAT was it that you were made more of?

“We have treated the story less as a satire and more of homage to the trilogy of movies”… okay….   this may sting a bit….    THEY ARE SATIRE.

If you try to pay homage to a satire by removing that element then you miss the essence of the art and become a collection of gimmicks and tropes that CAN be funny but ultimately lacks substance. Sure it’s kickin' demon ass, but that doesn’t mean you forget the WHY of it all. If Sam Raimi and company had stopped at simply killing zombies and silly jokes the movies would never have become as popular or as important as they are. Ya blew that one!

MJU: Whoa Franklin, welcome to the panel, I had no idea how big of a Deadite you were. I am a fan myself but I'll admit while I…

Ty:  Thanks Frank! Michael, you were saying?

MJU: In watching the Ground Zero version of Evil Dead I realized how hard it would be to not compare it to the Down Stage Right version. The Ash moments definitely stood out to me more in the DSR version. Structurally they are very similar but it is a new musical, so I can't imagine there would be much deviation from the original Toronto production. Ground Zero was granted the “professional” rights and, appropriately, it does show as it is more of a spectacle with some great special effects. There was blood raining down on the audience and a tree cleverly “climaxing” over the audience with green streamers. However, ultimately, both productions seem very faithful to the source material. It was like watching two directors remake the same movie shot for shot. While one had a bigger budget, it's the lower budget one that focuses more on the characters and the humor that comes from them, rather than just the blood and the gore.

FTS: Okay   okay…  I’ll give you the Vogue show was the blood splatter and gore fest that any self-respecting Deadite could want. The front 6 rows was it? They were literally drenched and that tighty whitey of mine is still stuck to the wall. But what else could you say was right about that show?

Ty: What about Jake?

Kev, thank god you had Bruce Horak! He was the best thing on that stage. The man was undeniably the strongest singer, as well as delivering lines with timing to set your atomic clock by. The man was impeccable! I really wish you’d have let the rest of the cast be as good. I mean if Tyler Rive didn’t get picked for his signing then it should have been cause he’s a groovy Ash… but what am I left feeling?  You forbade them from studying their characters source material right?! Okay maybe little sister snuck away one night and watched them by herself: she’s got the voice, attitude and she did go all the way with the trees.

FTS: And the Hand? Giving the shocker?! Priceless…

MJU: You're right, Bruce Horak as Jake steals the show. He had all the best lines, but it really showed the glaring weakness of the production: Ash. Tyler Rive has all the tools for a musical actor, but I'm not sure if he can be a lead, especially for a character like Ash. While he does look the part, Ash is supposed to be larger than life, and funny as hell. Without that key element Evil Dead kinda just slugs along until the next big splatter moment happens. It's great that Evil Dead is opening up musical theatre to a whole new audience, but I don't think this production will push anyone onto the pro-musical side if they were already sitting on to the fence going in. What side of the fence were you on Franklin?

FTS: Fence? I’m the tractor that just trundled past ya! This is exactly what I’ve been talking about Mike! They took the heart out of the material and didn’t take a bite before they threw it away! Of course it won’t convince anybody to be pro-musical. Unless they’re gonna do this piece some justice!

Ty: Okay. Thanks Masey-Ferguson.  I think what we all agree the DSR version had more of the essence of that which is Evil Dead, and the GZ folks had the blood guts and Bruce Horak but has anything really been learned from this experience?

MJU: If I've learned anything, it's that this whole situation with two existing productions had to be a war, no matter how well-intentioned it was to have two productions on at the same time. It's unfortunate, but in this fickle Vancouver market, it's going to be war.

One thing both productions have done is sell me on Evil Dead as a musical. Both, all in all, were really fun shows, and I wouldn't hesitate to see another production if someone decides to do it again – and I have a feeling they will. The cult following are going to demand that Evil Dead returns, and maybe the silver lining from having two different productions is that it creates a learning process for whoever does it next time and a challenge to be even bigger and better than these ones.

FTS: Learned? Huh, nothing I didn’t already know. Great material is funny but still requires a director who understands it to be successful. Don’t even get me started on how crappy those one-liners were cause nobody in GZ knew how to deliver them! ‘cept Bruce. You know, I certainly hope the GZ folks learned something…  Kev, as far as this production goes, I’m not gonna say you spoiled the bed cause it’s made with rubber sheets. I’m sure you didn’t try to mess this up on purpose, but you gotta ask yourself just when it was you got bit by them Kandarians…?

As for the rest of you talented folks on and off the stage: Close, but you’ll all have to share Bruce’s cigar with the blood splatter people…

Ty: Thanks for the vitriol Frank. I’d like to congratulate both productions on putting up something amazing for this city to witness and enjoy and for supporting each other as much as they have in spite of people making more out of this than it really needed to be. In closing I’d like to suggest that if you haven’t gone to see either of the shows you get your butt down to the Vogue and check out the GZ version while it’s still here. Guys, any more thoughts?

Michael John Unger thinks the original Evil Dead is the best of the three. Sam Raimi's most underrated film is “A Simple Plan”, and Bruce Campbell's best film is “Bubba Ho-tep”.

FTS agrees wholeheartedly with MJU: Dead by Dawn is the best of the three movies, Mr Raimi’s most underrated work is undoubtedly ‘The Quick and the Dead’ and Mr Campbell’s shining moment would have to be his turn in ‘Fargo’.

Tyson thinks Army of Darkness is his favourite, he’s really looking forward to Spiderman IV and who didn’t enjoy Jack of All Trades. If chins could kill indeed.

Unfortunately, for those who like to compare and contrast things, the DSR version closed this past week while the Ground Zero production continues to hack, maim and spew bodily fluids onto audiences. For more information go postal here.