The Plank Panel take on The Pastor Phelps Project 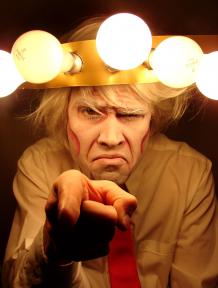 The Show:
The Pastor Phelps Project, which, thanks to the real threats of protest by the Westboro Baptist Church, is the most notorious show at this year’s SummerWorks Festival.

Alison: So THAT'S what Canadian theatre has been missing - live re-enactments of The Tyra Banks Show! Really, why doesn't that happen more? Why doesn't every single SummerWorks show have a scene that's just a Tyra Banks Show transcript? Can that be a rule for next year?

Kate: The first thing I'll say about The Pastor Phelps Project is that it is amazingly tight. That really impressed me – every move, every head turn, every facial expression had been clearly chosen and tirelessly rehearsed (except that one choral scene that no one seemed to know. That was odd. A late addition, perhaps?)

Daniel: It's funny that the cheeriest, shiniest, and most downright adorable show I've seen at SummerWorks so far is The Pastor Phelps Project. This was the play that found itself in the middle of some pretty major controversy only a few days ago, with Phelps' church apparently headed to Toronto in protest. As it turns out, Alistair Newton's extremely polished and well-executed "fundamentalist cabaret" is too endearing to be really venomous. It's performed by a very young and hugely versatile cast who show off some serious musical theatre chops. Like Kate said, they attack each number with amazing precision and panache. Given the subject matter and the ghoulishly effective production design, it's kind of like watching Bye Bye Birdie on peyote. Which isn't necessarily a bad thing.

Kate: For a show about an extremist church that everyone loves to hate, it was remarkably unbiased. In the same way that The Laramie Project achieved this, The Pastor Phelps Project managed to get me listening to what the members of the church had to say, particularly Shirley Phelps. Obviously, it didn't make me want to go off and join the church and I didn't agree with a single word they said about homosexuality but I felt that I was given permission to hear their version of the truth, without judgment from the cast members. The show made a point of demonstrating that no one ever lets the members of this church speak (eg. Fox News cutting Mrs Phelps off every time she tries to speak; Tyra Banks constantly interrupting her or repeating what she says in a judgmental tone.) which made me want to listen. I found it fascinating, for example, that Fred Phelps is (and always was) an avid supporter of equal rights for people of all races. This makes his hatred of gay people, America, the army and "fag-enablers" even more troubling and complex. And performance-wise, Carey William Wass (as Fred Phelps) blew my mind a little bit.

Alison: No kidding. His Zoltan-meets-Linda Blair sputterings were creepy and compelling. The whole show pretty effectively creeped me out right from the start – I was sitting at the back, and I think I was one of the first people to notice ghostly little Raffaele Ciampaglia clutching his naked Ken doll and asking people where his mother was. And whiteface is just spooky. Not to mention Evalyn Parry’s chilling turn as an unflappable Shirley Phelps. But for all the spookiness, it was also the most fun I’ve had at the theatre in a long time.

Daniel: For me, the most effective parts of the show were when they let Phelps' words speak for themselves. These moments were by far the most gripping and carried the most dramatic weight. I was also a big fan of the right wing media montage. Very cheeky and funny, and so interesting to see those Fox News people go head to head with Shirley. I’ll echo the praise of Carey William Wass - hilarious and chilling in equal measure. Evalyn Parry is every bit his match as his soft-spoken, fiercely observant daughter Shirley.

Phelps himself is such an infuriating mass of contradictions. Newton's done some really great work here, and I hope he takes another stab at the material sometime soon. I'd love to see him weed out some of the more superfluous musical numbers, clarify the very intriguing framework of the lost boy that serves as our guide and further explore Phelps's very complicated relationship with his God and with the outside world.