The PLANK Panel take on Aida 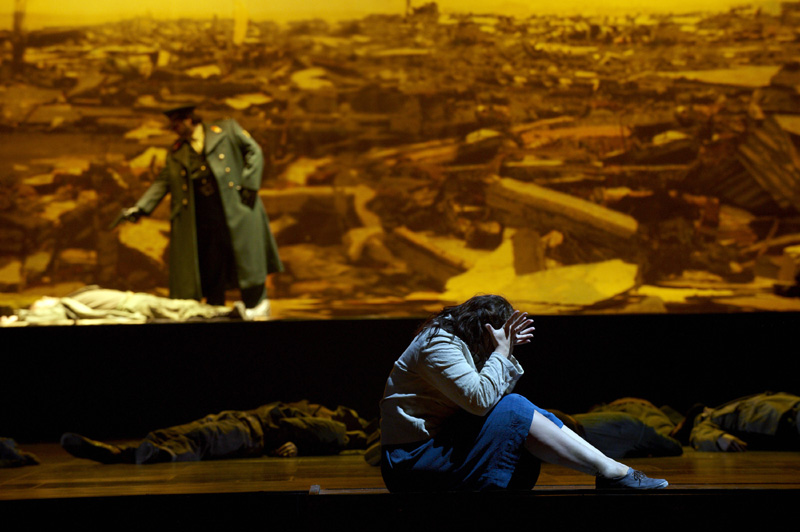 Rosario La Spina (back) and Sondra Radvanovsky (front) in the Canadian Opera Company’s production of Aida. Photo by Michael Cooper

JH: The difficult thing about writing reviews of operatic productions mounted by a world-class company like the Canadian Opera Company is that when it comes to the 'technical' aspects such as vocal and musical performances, there is often much to praise and little to complain about. Or in other words, a lack of stinkers can sometimes make for a dull and frothy article - which is not necessarily a negative, as the purpose of a review by no means to be 'interesting' or pithy but rather informative and hopefully insightful.

Thankfully, the COC has also proven to be a company very open to the idea of creative and non-literal interpretation of well established works, and that has resulted in some very memorable stagecraft, even if the same qualities that make that stagecraft memorable also induce a certain amount of head scratching. Now that combination makes for good dialogue and I think their season opener, Giuseppe Verdi's Aida - which centres on an Ethiopian noblewoman turned Egyptian slave torn between her love for an Egyptian military hero and her own people - leaves plenty to talk about.

RKS: That’s right, Justin. While Aida is torn, her love Radames and her mistress Amneris also face terrible choices. Radames must decide between his love for Aida and his loyalty to his country, which binds him to vanquish Aida`s people and marry the Pharaoh’s daughter, Amneris.  Amneris, in the meantime, must decide whether to impose the law on traitors or let Radames and Aida escape together.

Like other tragic love stories, Aida has been reinterpreted for centuries. Verdi’s opera debuted in 1871 in Cairo, Egypt. It has been mounted all over the world. In the 50s, Sophia Loren starred in a film of the opera. Then, a TV version was produced about 30 years ago, not long before Elton John and Tim Rice created a pop musical of the same title. It’s a love triangle, a conquest adventure, an ill-fated romance, but what gives Aida lasting resonance is the individual character development of Aida, Radames and Amneris. Each of them must find impossible reserves of strength and courage in order to make the choices confronting them. In this production, Jill Grove as Amneris delivers the standout performance and shows real change in her character, from curtain to curtain.

JH: As predicted, I felt that there were few major flaws in the musical presentation of Aida. Conductor Johannes Debus was in firm control of the orchestra and I thought did a very capable job of highlighting the score's occasional staccato qualities and its sudden and impacting silences. Sondra Radvanovsky in the titular role delivered a tender performance both vocally and dramatically, although I did find that when she was forced to reach for the upper end of her range a slight shrillness occasionally set in. Of the secondary characters, none disappointed me, although I thought Scott Hendricks as Amonasro the Ethiopian King stood out for his commanding voice and subtle but distinct acting.

RKS: I couldn’t agree more about Hendricks. Both his voice and his stage presence provided a much-needed anchor amidst turmoil. He conveyed strength and certainty, and he lent those qualities to his co-stars when he shared the stage with them.

Radvanovsky did not show these qualities on her own. Her voice was magnificent, conveying depth and colour comparable to the likes of Renee Fleming. She displayed such control over her instrument, spinning it from massive power to incredible fragility. Radvanovsky is a magnificent actor in her voice, however I was astonished at how dull her performance was visually. Unfortunately, her marvelous emotional depth and understanding never translated into her body. Visually, she never showed the independent strength that lies at the heart of Aida.

Rosario La Spina was by turns, imposing and vulnerable as Radames. His vocal performance was lovely, despite a blip or two during emotional climaxes. And he showed real conflict internally, however he lacked conviction. La Spina seemed a little too unsure of himself to commit to the passion Radames must have, the desire that wars against his visceral need for glory. I hope he’ll settle into the role as the run continues, or perhaps he’ll settle into himself as actor.

Jill Grove was undoubtedly the star of Aida. As Amneris, the third side of the love triangle, Grove combines vocal virtuosity with affecting emotion and strong stage presence. Her range of emotion was like a hearty meal, bringing the audience through distrust and hostility toward Amneris to love and empathy. She was present during every moment of the show, and she brought forth from herself real strength to face the end, even in despair.

JH: Director Tim Albery is perhaps the unintentional star of this production - or target of ire depending on how you feel about his creative choices. There is no doubt many a director and production designer who drool at the opportunity to evoke ancient Egypt in all its glory (Aida's inaugural production set the bar high with a literal parade of exotic African animals), but Albery eschews the obvious treatment and instead gives us what I interpreted as Aida: the 1970's Latin American right wing military Junta version - think Pinochet's Chile with more incongruous references to the god Isis. It is a bold choice, and certainly more obvious than the pairing of holocaust themes with The Flying Dutchman in a previous COC production, but Albery also appears to have a hard time reigning himself in. Many of the visuals work well (a scene close to the end of the opera in which a large group of "officials" enter a clinically clean and fluorescent lit hallway then methodically remove their suit jackets and descend into an unseen holding cell to cross examine a prisoner should be utterly chilling to anyone familiar with the 'disappearances' made infamous by Pinochet and similar regimes) but other moments are so outlandish that it jolts one out of the experience and weakens the emotional impact. One such moment comes during the famous Triumphal March in which gold-jacketed disco hussies reveal glow in the dark skeletal designs adorning their torsos while grinding pelvises with grotesque soldiers. Not too surprising that what walk-outs there were during the performance came at that particular moment.

I noticed more walk-outs during the conquest fantasy that came after Egypt vanquished Ethiopia for the second time, Act II`s victory celebration.  The damage of war is made painfully clear, as Egyptians torment Aida with propaganda, and she watches bodies of her countrymen collapse. Then, Egyptians celebrate so physically that visceral reactions arise. The women stand on the corpses of the defeated and search them for booty. Then, they straddle their victorious soldiers, peel off their coats and reward the soldiers, right there on the floor. That’s when I saw the most walkouts. I say, at least Albery engaged the audience, one way or another. That’s an achievement with an opera as well-known as this.

JH: Just for clarity's sake, we are in fact talking about the same scene. What you call the "conquest fantasy" is commonly referred to as "The Triumphal March". I do agree with you about the earlier temple scene (which I was not referring to in my previous comments) - the juxtaposition of eroticism and militarism was very effective. And visually it had an almost Kubrickian quality to it.

I do maintain that that particular moment during the Triumphal March was an arguably gaudy and unnecessarily heavy-handed misstep that only repeated what was already made obvious. Having said that, Albery's decision to treat the Triumphal March with a great slathering of irony - presenting the audience with a live montage depicting the horrors of war against the grand uplifting score - is a delightful move that invites comparisons to well known equivalents from filmdom like Apocalypse Now's helicopter beach assault scene and A Clockwork Orange's rape scene. The Triumphal March is a wholly obvious example, but to his credit Albery also uses irony with somewhat more subtlety and wit in an early scene in which Radames and Amneris sing passionate and furious asides about Radames' forbidden love for Aida all while sitting politely and sipping from dainty gold teacups.

Set designer Hildegard Bechtler also gets my kudos for surprisingly versatile sets that often evoke the glamour of vintage Hollywood melodramas. Icing on the cake perhaps, but in this case an element that I felt truly affected the overall mood of the piece. Costume designer Jon Morell, and lighting designer Thomas Hase also make strong contributions to complete the iconic look.

RKS: Absolutely, props to Morrell! His costume designs communicated status clearly but did not distract. And they caused some of the strongest reactions during the show. I’ll just say this: skeleton leotards.

JH: Oh those glow in the dark leotards again... I didn't object to their design per se, but they were so utterly unsubtle that I could almost hear South Park's Mr. Mackey talking down to me; "War is bad, mmmkay?"

I imagine that Aida is likely strongest when presented in a more conventional manner; the religious references of the libretto don't fully mesh with this production concept, I felt the theme of slavery was pushed aside at the cost of highlighting the idea of militarism, and honestly, who doesn't like a little old-school spectacle? Nevertheless I think it was worth the risk; I believe Verdi and his librettist were careful to create a piece whose message would be clear despite the distant setting and time period, but I also applaud Albery and the rest of the creative team for tying the work to more recent and complex political history.

RKS: True, spectacle is nearly always appreciated in opera. However, I saw Albery`s adaptation as reducing spectacle to show how relevant the story is. It’s not really about slavery or political intrigue, although those elements are present. Fundamentally, Aida is a character piece. All characters in it, especially the three points of the love triangle, face horrible decisions – the kind that only war can necessitate with such efficiency. Aida, Radames and Amneris are trapped by their stations, against their personal loyalties. All of them must decide who they love most, what they most value and what they will sacrifice. All of them must decide how much they can survive – how much they want to survive. That kind of conflict transcends setting. It’s about humanity.

Produced by the Canadian Opera Company, Aida is on until November 5 at the Four Seasons Centre. For more information go here.