The Plank Panel flies with the Flying Dutchman 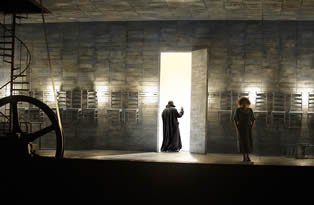 After a long too long hiatus, the venerable PLANK Panel returns with their take on the Canadian Opera Company's current production of The Flying Dutchman, currently on at the Four Seasons Centre in Toronto.

Justin: It’s very fair to call the COC’s production of Wagner’s The Flying Dutchman controversial, partly because of its unusual staging, and largely because of its allusions to the Holocaust. I don’t think the COC has courted such controversy since their presentation of La Traviata which included a leather and bondage themed party scene. Personally I have no qualms with over-the-top opera productions - I think the medium almost demands it, but I can certainly understand why purists would are mortified to see their beloved works put through the post-modern meat grinder. Some would argue it’s a matter of taste and decorum, not crossed-arm stubbornness, that brings about these protests, but then again, I don’t recall nearly as much fuss over the full frontal male nudity in House of the Dead.

Roselyn: Sure, Justin, I’ll agree that this production goes over the top reinventing a Wagner classic. That’s what has to be done to keep developing the classics, and I applaud director Christopher Alden for the risk he takes by dehumanizing the characters and empowering fate or demons or what-have-you instead.  In a story such as the Dutchman’s, directors must take extreme measures to make the story new again. What else did Gore Verbinski do with Pirates of the Caribbean 2: Dead Man’s Chest? That was a star-studded, effects-hyped, downright funny version of a story that’s been around for centuries. A ship’s captain, for some reason or other, is doomed to sail the seas forever – with one loophole. That’s the hinge of Pirates of the Caribbean 3: At World’s End. The doomed captain is permitted one day ashore every so many years for the sake of love. Well, in Wagner’s story, the Dutchman gets one day ashore every seven years to find himself someone to love. Only through her – a wife who will be faithful until death – can he escape his curse.  Wagner’s heroine, Senta, has heard of this twisted tale, and she wants to be the one to redeem the lost soul. Her father, dazzled by the Dutchman’s riches, promises her as the Dutchman’s bride, and it seems as though they’ll save each other. Of course, that wouldn’t be a tragic opera. So, there must be a perfectly normal, non-cursed suitor to complicate matters and give us that gut-wrenching ending.

Justin: The funny thing is I saw this production when it was first mounted at the Sony Centre (then known as the O’Keefe Centre), as part a high school German class. I believe it was the first live opera I’d ever seen so considering that was something of a formative experience (and a positive one as I recall being quite taken with the spectacle) that might explain some of my nonchalance in face of this production. That is not to say I don’t necessarily agree with the decision to incorporate holocaust imagery, or to draw parallels between the legends of the Dutchman and the Wandering Jew. I think taking older works and tying them to contemporary or at least modern history is a welcome and legitimate artistic tactic, I just don’t think The Dutchman is the right piece in this context. Considering the entire canon of operatic works, and how many of them include broad themes of oppression, imprisonment, power, and victimization, it seems like a supernatural and bittersweet love story such as this one is just not a strong enough framework on which to hang commentary about the Holocaust.

I can see that there is a strategy on the part of the creators to use the Dutchman character as an emblem of guilt; his inability to find solace or resolution is like that of the western world’s ongoing and quite possibly conclusion-less parsing of the 20th century and its horrors. But to evoke concentration camp imagery so overtly (especially using the emaciated striped-pajamas figures under the stage) almost distracts from what is otherwise an apt bit of symbolism.

Roselyn: I agree, this production loads up the symbolism, Justin, but I don’t think they’re Holocaust references. Sure, you could take the gaunt-faced, striped-pajama-wearing sailors as concentration camp victims… but I think it’s a stretch. The factory-like setting in which the women work, the rigid choreography they work within, all that speaks of imprisonment – absolutely. But starvation and genocide? Not so much.

The set and costume designer Allen Moyer deserves all the applause unto himself for this show. Paling makeup and blackened eyes make the cast look haunted, if not possessed. But it’s the slanted set that brings the audience into the prison. Inside a plain, gray box on a 30 degree tilt, all the key players are imprisoned, trapped by fate just as the Dutchman is.  With no intermission to break the illusion and brilliantly stark lighting by Anne Militello, these elements raise the bar for The Flying Dutchman.

Justin: The Holocaust thing is, however, my biggest complaint. In most other respects I thoroughly appreciated and enjoyed this production. Musically, I think Dutchman can claim one of the great operatic themes, and its creation came at a time in Wagner’s career he was still putting together tuneful and pleasant melodies, like the Spinning Chorus, and starting to experiment with the hyper-dramatic orchestration that would become his signature. The two styles make for real variety contained within the same work, and gives the score roller coasteresque quality. Conductor Johannes Debus does a great job of rolling with the score, and really drawing out the high and low emotional points.

Evgeny Nikitin (the Dutchman) is not the best physical performer or actor, but there is an effective earnestness in his vocal delivery, a lack of pretense perhaps; when I closed my eyes it sounded as though he was a tortured soul alone in a room speaking (or speak-singing) to himself, not playing to an opera house full of people. Julie Makerov (Senta) has a formidable voice but delivers an awkward and distant performance that does not engage the audience as it should. Barbara Dever (Mary) has a small part but was a pleasant surprise, delivering a standout performance both musically and dramatically.

Roselyn: I can go along with your assessment of Nikitin performance – best if you close your eyes. His vocals are flawless, though not captivating. However, his stilted, comatose movement was too exaggerated to help his characterization. We live in a culture of shortened attention spans, and this guy’s been waiting for more than a lifetime. For goodness sake, get to the girl already! Makerov as Senta gave a good performance in a very difficult role. The heroine spends her first act on stage staring at a picture – bit hard to relate. Then, she wants nothing more than to sacrifice herself to a cursed soul – again, bit weird. Makerov’s voice is strong, melodious and rich. She performed her role with conviction. I think Moyer and Alden could’ve helped her out a bit. It’s easy to communicate that a heroine’s supposed to be beautiful, virtuous and lovable. Her costume and makeup did not. With that triangular, muppetesque hair, I was actually expecting some ironic twist coming when her father sang, “She’s as virtuous as she is beautiful.” That’s not how you want your audience to think of a heroine who makes herself a martyr.

Justin: Director Christopher Alden is no doubt the brunt of much praise and spite for his stylized treatment which draws from silent film melodrama and expressionism. His blocking is exaggerated but works within the surreal confines of the production; his use of the ensemble to create striking visuals is particularly noteworthy. His choices with regards to Senta’s passionate fascination with the Dutchman are equally effective. It’s an odd character trait that would be hard to rationalize in most circumstances but Alden gives it a subtle fetishistic quality, making her attraction to a doomed spirit that much more tangible. If there is a major misstep it is in the banquet scene which abandons the otherwise consistent and moody blue-grey motif in favour of hot neons, resulting in an inexplicable and incongruous rave number.

Roselyn: I’ll go with you on the rave scene. I think the idea was to unnerve the audience with the ghoulish lighting and garish costuming. Even the overtly sexual choreography may have been intended to unsettle us after so much stilted blocking and cold lack of contact. It didn’t work. And from seats way up in Ring 5, I don’t think the corpses lying beneath the feasters can even be seen.

Justin: The design team deserves a major nod for their work. The slanted set appears at first glance to be little more than a large five-sided box but one quickly discovers the walls are full of trap doors - much like a 3-D advent calendar - which offers up a surprising number of configurations. The fact that the set also has a very solid ceiling makes the broad and stylish lighting design that much more remarkable as a technical accomplishment.

Roselyn: No argument here. The set and lighting were, indeed, excellent thanks to Moyer and Militello. I’d say the only person whose contribution to the production was as great is a performer, Mats Almgren as Daland, Senta’s father. His deep voice is at once forceful and gentle, graceful and in perfect pitch. His characterization of Senta’s father was pompous without too much pretention, pushy but not too aggressive, affectionate yet restrained. He was the most likable character, by far.

Justin: Well Roselyn, it strikes me that we agree that this production is a true spectacle, even if we disagree on some of the artistic and thematic elements. In that respect, I think it’s fair to call it a success; any show that combines high entertainment value with a complex treatment that invites debate and interpretation cannot be denied that moniker.

The COC's production of The Flying Dutchman continues until May 20th at the Four Seasons Centre. For more information on the production, go here.