Pipef@%! - A well-oiled machine that churns out confusion 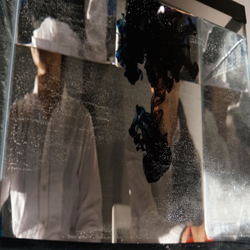 If you like symbolist, Artaudian, avant-garde, experimental theatre, I would recommend making the trek out to the Firehall because there aren’t many shows like this at the Vancouver Fringe Festival.

But if you don’t, then don’t waste your time with this show.

I don’t like this type of theatre. But that’s just me. Objectively, Pipef@%! is a well-oiled assembly line of activity that is passively interesting but produces no clear messages or story in its 60 minutes on stage.

It does, however, invoke an academic, esoteric interest for those who like to analyze this sort of performance art. The actors go through a series of repeated movements and monologues, moving focus from one set of characters to another in an abstract order.

There seems to be something symbolically going on with the actions, like touching a desk, scrubbing a floor, cutting open a fish; disjointed conversations between actors on stage and on screen; giving away water bottles to the audience, then yelling at them in French. But I could not grasp exactly what I was supposed to take away. Everything landed on me the same way the dialogue did: like the fan beside my bed that helps me fall asleep—soothing white noise.

I think this is a collective-creation piece—the actors work very hard together but there’s no singular vision or continuity. It could have used a director or dramaturg to bring the piece more coherence. If there was one, they should have worked on creating a through-line for the audience because it feels like five different theatre class presentations soldered together with unrelated physical gestures segueing one set of actions to another.

There are a lot of elements of Antonin Artaud’s Theatre of Cruelty here. The challenge with that style is finding a way to use theatric aesthetics (dialogue, costume, set, actor, space) to create Artaud’s idea of a hieroglyphic language of symbols.

And the actors in Pipef@%! compose a fine, entertaining vocabulary. At one point, two actors took turns shoving their heads into a fish tank filled with water (the violence of which could have been more rehearsed). I love actors making messes on stage and water gets everywhere. Several actors engaged in a dance-like routine, mimicking each others’ movements in some kind of contest. These were all great to watch. However, if these were meant to be syllables in communicating something, there was no time, context or repetition to learn this new, symbolic, theatrical language. There is something being communicated here, but it was all Greek to me.

In terms of subject matter, the play grazes over some contemporary issues: land exploitation in B.C., housing in Vancouver, bottled water, employment discontent and transgenderism, but offers no meat for the audience to sink their teeth into—like a provocative newspaper headline that’s missing the article.

Ultimately, Pipef@%! is a charming sensory experience on the immediate surface. It feels like it has depth but lacks a clear path towards deeper content. The show seems to exist for the sake of existing. Like a cactus in the rain.