Pichet Klunchun and myself: Being here now with you 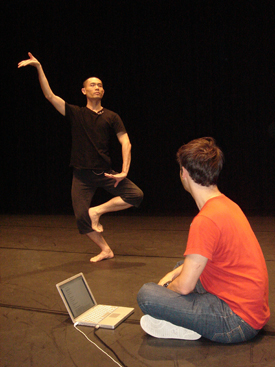 I wish I could tell everyone to run out and see *Pichet Klunchun and myself*, part of this year’s "Vancouver International Dance Festivalh":http://www.vidf.ca/, but it ended last Saturday and that’s a damn shame. Anyone interested in contemporary performance, and why it’s worth doing and seeing, would have found illumination and inspiration from this piece.

The show’s structure is simple yet contains a world — no, two worlds—of insight. "Pichet Klunchun":http://www.pklifework.com/, a classical Thai dancer, and "Jerome Bel":http://webamilease.amilease.fr/jeromebel/eng/index.asp, a French contemporary choreographer, investigate each other’s poesis. In doing so the traditional and the post-modern are laid bare as two opposing cultures.

For the first half of the show, Bel does the questioning. He sits in a chair across from Klunchun, trying to understand what motivates the formal physical vocabulary of Khon (the particular Thai dance that is Klunchun’s devotion). Klunchun explains and demonstrates (with devastating physical precision) why a jerk of the back means crying, why a turn of the chin means carefree, why an in-turned left knee belongs to the monkey character and not the demon character. It’s a semioticians dream: every physical ‘signifier’ has a corresponding ‘sign’.

Never having seen this kind of dance, I have nothing to compare it to but it seems that Klunchun is working at a very high level. Simply watching him walk from stage right to left is mesmerizing. I couldn’t take my eyes off the methodical articulation of his feet. Klunchun explains that in his dance, which is based on the great Indian epic The Ramayana, Rama represents the King. The arrival of democracy in Thailand displaced the King, and therefore the subject of representation. Khon has become a tradition unmoored from its past, now mostly performed in restaurants for Western tourists. Klunchun’s life mission is to restore and revive the art form. Bel notes that ballet, the foundation of Western dance, was invented by another monarch, the King of France (Louis XIV), who used to perform it but that during the French Revolution the French people cut his throat. Since then, dance in France no longer represents the King, but is supposed to mirror the lives of everyday people. Following this logic Bel sees himself as an equal to his audience, not as an elevated specialist.

Taking his turn as interrogator, Klunchun asks Bel to perform an example of what this egalitarian art form looks like. Bel reluctantly shows him the core of it, the one thing he insists on putting in every one of his shows. It consists of Bel standing and watching the audience for about two minutes. Baffled, Klunchun asks for an explanation. Bel says it’s the opposite of Khon, where the performer represents someone else—the king of Thailand; it’s also the opposite of traditional Western theatre and dance, in which the performer represents the King of France or some other ‘character’. It’s about the breakdown of that kind of representation, the stripping away of the fiction. It’s about performer as him or herself. It takes advantage of the theatrical situation by having the performer and the spectator openly acknowledge one another’s co-presence. It makes performance a primary reality, instead of something that is standing in for something else. Bel feels that, surrounded by representations of reality, we live our lives only vicariously.

Klunchun doesn’t yet see the point. Do people pay for this, he asks? Do they ever ask for their money back? Does Bel give it to them? They do ask, says Bel, and no, he never gives the money back. Why? Because he makes no promises to the audience. Here’s how he rationalizes it: contemporary art is about discovering new forms. Unlike Khon, there is no “recipe.” The artist must conduct research. While doing this he must eat. The funder (in his case the government of France) gives him money to feed himself while he conducts his research. Because it is pure research, there is no guarantee as to the outcome. The audience member knows this. He or she is voluntarily taking part in an experiment. Therefore getting your money back is out of the question.

Curious but not convinced, Klunchun keeps excavating. Earlier, Klunchun had demonstrated how a character in Khon dies—always off stage. It’s bad luck for a performer to ‘die’ on stage. On the other hand dying on stage is a staple in Western theatre. But Bel likes to break even this down. In one of the funniest parts of the evening Bel demonstrates a death from one of his previous shows. He takes the whole length of “Killing Me Softly,” sung by Roberta Flack, to get from standing to, softly, collapsing on the floor. He does this while staring at his audience—in this case Klunchun. Because it happens so slowly, there is plenty of time for us to think about what we’re seeing. I find the whole thing unbearably funny. Klunchun on the other hand is almost moved to tears. Something about the death, abstracted as it is, has made him think of his own mother’s death. Yes, now he gets it: spectator and performer encounter one another; space is left in the performance for the spectator to enter into, to reflect, to muse, to criticise.

For the duration of the show, the two artists have excavated each other’s approach to making art. In doing so, profound cultural differences have been revealed (why one must marry before having children in Thailand; why nudity on stage is acceptable in Western performance). This may sound a bit like a talk show or a lecture. Admittedly, it’s hard to describe how delightful, surprising, and genuinely funny it was—and why this is one of the best shows I’ve ever seen. Maybe it’s because the two men are so honest about themselves and what they do, and because they have put so much thought into it. As a lover of contemporary performance, I was engrossed. But if you know nothing of Khon or the theoretical underpinnings of contemporary performance you would have been fine. Like the best storytellers, Bel and Kunchun, led us through the exposition with care.

It turns out there’s a sequel to this show. In it Klunchun adds mask and costume and demonstrates Khon more fully. I don’t know what Bel does, but I’d love to see it. Budget constraints usually prohibit such things, but I appeal to the relevant funding bodies to support a return of the show, with its sequel. Too often with contemporary art we’re left to confront new forms with no understanding of what the artist is trying to do. The art is supposed to ‘speak for itself’. Here I felt I got to see both the art and the methodology. Bel and Klunchun did achieve equality between spectator and performer. They gave us the tools to enter into a profound exploration of performance, and to reflect upon what makes us Westerners or Easterners, traditionalists or postmodernists, or a hybrid of all those.

_Pichet Klunchun and myself was presented at the Roundhouse by Vancouver International Dance Festival, March 5-7. Find out more by going_ "here":http://www.vidf.ca/index.php?option=com_content&task=view&id=27&Itemid=23