Not Enough —Brave and Touching 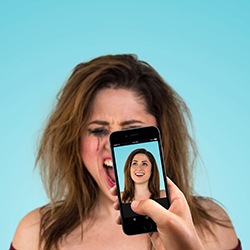 The show is written and performed by Megan Phillips and directed by TJ Dawe. Megan Phillips is a performer from Vancouver, BC, Canada. The story is based on her Vipassana 10-day silent meditation experience. It is a one woman performance, a true story of change, personal growth, forgiveness and becoming “enough”.

Not Enough is a story of a young woman who’s reached a crisis point in her life and career, who needs change and growth. She tells the story of her transformation from a shallow, ill-focused individual who creates chaos around her, which is frustrating to friends, family, workmates and, finally, to herself. She didn’t get the attention she needed as a child and felt unloved, jealous of others, insecure and dependent.

By playing back recordings of her own voice, she creates the effect of a human mind full of self-criticising voices. She portrays somone who is suffering from anxiety, often stuck in a loop of negative thoughts. She generously and honestly shares her story, her mistakes and journey to forgiveness, and acceptance of herself and others. She faces demons that she never knew she had.

Overall, this performance is funny yet serious, but also brave and touching.

If you want to learn how to get over yourself, you might want to watch the show.