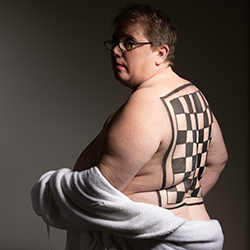 Leaving the auditorium after Nerdfucker, I felt like a defiant teenager. I found the performance charming and heart wrenching. I was rooting vehemently for the main character by the end of the play, and was ready to rush out and tell all my friends to see this great show!

But after the audience’s enthusiastic applause was shushed into silence by Cameryn Moore’s insistence that we tell everyone we know about the show because this play deserves a bigger audience than it had (at 7:30 on opening Thursday), I was left feeling like my appreciation was underappreciated. My experience of the past hour was trivialized, my initial enthusiastic impulse thoroughly dampened.

Now I'm torn, just like when I was a teenager, planning to clean my room but then having to abstain because my mother told me to do it just before I got started and I didn't want her to think that she had influenced my decision. Sometimes I can be irrationally stubborn.

So let's look at the notes I took before Nerdfucker ended and I got all angsty:

I arrived at my very first 2016 Fringe performance hot off my own personal anxiety and self hatred issues, so the content penetrated right into a deep part of me that may or may not have been accessible otherwise.

The action begins offstage and house lights stay up through the entire performance. Where we are is where we are. No fourth wall required. Not a new device, but an appropriate one, setting the context of the plot. Unfortunately Moore, charming as she is, has a quiet, self deprecating style that deflects our attention off of her. This is perfect for her character and disastrous for holding a conversation with the audience from offstage. All that dead time made for a bumpy start, and I never felt truly immersed in the world of the play, not having a boundary line for my suspension of disbelief. Still, the character felt real, if understated, and I managed to override that distraction.

I found the character (no show program, sorry guys) utterly charming and believable, especially her giggle, perhaps because I found it so easy to identify with her. I could have sworn that in particular the piece about finding someone attractive when their face lights up with excitement talking about something they love must have been lifted from a conversation I had with someone not too long ago. Moore’s rapid fire speech pattern was again perfect for the character, but her articulation could have been better. I managed to understand every word, but it took more concentration than was comfortable.

Nerdfucker is an insightful and endearing piece. Not flashy or innovative, but dealing with very real issues from a vulnerable alternative angle that many people may not usually consider.