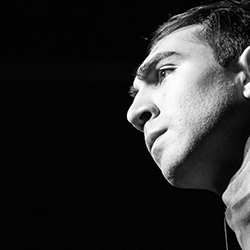 In performance and in script, My Ocean is a gem of a show. Considered individually, each facet of Nadeem Phillip’s rendition of a bookish twelve-year-old glimmers brightly.

He can show you what it’s like to overflow with wide-eyed wonder at nature.

He can portray the impotent, naive rage of a young boy as he becomes aware of the horror and injustice in the world.

And he nails the raw physicality of a child doubled over in emotional pain.

It’s only as one is walking out, reflecting on what they’ve just experienced, that they begin to realize what a voyage it has been, and what masterful hands were at the tiller.

One can say much the same of Sasha Singer-Wilson’s tremendous script. Like many of my favourite plays, My Ocean tells two stories at once. The first is about the protagonist’s struggle to be loved and understood in his ugly, painful, and all-too-believable home life; the second is about the beauty of our planet’s oceans and the grievous harm that modern civilization is doing to it. The underlying unity of these two threads is that the environmental storyline puts the protagonist’s life in a broader context, while the personal storyline humanizes this big picture and, perhaps, offers a clue as to why humans do what we do—how we can harm the world so much even when our intentions are good. My Ocean captures the anxiety of our culture over the degradation of nature better than any story I have seen, heard, or read.

It’s just the icing on the cake that Phillips has such a warm, natural stage presence. There is some audience participation regarding props; in this, Phillips succeeds in never taking his audience for granted. When we engage with him, he responds honestly and naturally without a ripple or warp in the portrayal of his character.

For me personally, My Ocean hit profoundly close to home. The protagonist’s childhood memento, a book about the ocean from the Eyewitness series of books that was a gift from his mother, reminds me of similar books that I cherished during my own childhood. The description of the abuse and simple dull callousness that he endures from the people close to him, as well as the depictions of childhood alienation and grief, resonated with me intensely. Leaving the studio, I was shaken, and found it hard to collect my thoughts. My Ocean says something profound and important in a beautifully understated way.