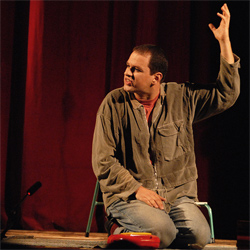 Roy Horowitz has been touring with this show for nearly 20 years. His credentials seem golden and his commitment to theatre is unquestionable.

A classic Fringe show, it's a one-person piece with a limited set recounting some of the “bizarre” situations this family admits they are used to. It's a portrayal of a young boy who's been encouraged to record stories by his writer father who gifts him with a children's tape recorder.  The brightly coloured plastic “My First Sony” is replaced later by one that looks less like a toy. The set includes many cassettes – most of which are filed under the “Quarrels” sign and two pairs of headsets.

Horowitz delivers the script rapid-fire in the voice of the eleven-year old who tells us about his parents' failing marriage and his father's efforts at moving through depression and writer's block.

The play and the book it's based on are written by Benny Barbash. The script is strong (obviously strong enough to have such staying power). It carries you along with an underlying feeling that things will not end well. I never lost the sense that this was an adult giving the lines of an 11-year-old boy but admittedly the 11-year-old boys I've known best are from Canada, not Israel.

Horowitz delivers the show in both Hebrew and English, Vancouver in English, of course... I found his accent sometimes got in the way of my easily catching every word and phrase. It would have helped me to have him speak a little more slowly, and I could have used a list of the siblings' names in the program guide. As some of the names were unfamiliar to me, seeing them written would have helped me follow along more easily.

My impression was that I might not be seeing Horowitz at his best. At the end of the play, he mentioned the 17-hour flight from Israel and I wondered if that explained a few misses on the lines.

It is a sad story and you can't help but find yourself imagining what it would be like to be that young boy, trying to make sense of his world by documenting it and then replaying the tapes over and over to himself. There is some humour, but not the laugh-out-loud kind. So if you choose to go to this one, go when you're ready and able to give it your full attention, and open your heart to this tale.