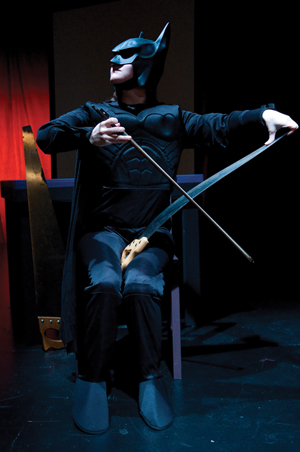 There's something to be said for walking into a Fringe play cold, knowing absolutely nothing about it. With no expectations, the lame ducks tend to be easier to bear because hey, it's a crap shoot anyway, and if it's good you get the bonus of the pleasant surprise of feeling like you found yourself a little gem, enhancing the experience of the play itself. Murder, Hope represents the great hope of the Fringe concept: the discovery of a diamond in the rough.

To clarify; this type of rough can be good at the Fringe. Rough is true to the spirit of the thing. It's supposed to be an opportunity to throw your experiment against the wall and see if it sticks. And stick this piece does, it's a swirling collage of seemingly disparate movement, song, puppetry, fantasy and performance art from which a narrative slowly and gently emerges, in a playful barter with the theatrical form. The jumble of components are an effective framework for a story about the erosion of the functions of a loved one's brain. Playwright/Performer Becky Poole has built a show that quite obviously comes from a personal place, and it takes advantage of her strengths as a performer. She's a gifted comedienne with a country/folk singing voice so lovely it would compel you to buy a soundtrack of the show's acapella Appalachian ballads (with Poole occasionally accompanying herself with the haunting glissando of a bowed hand saw. Seriously.) were one offered for sale on the way out. I would have.

It's a messy show. The stage is littered with a collection of the oddest looking props, making it look off the top like the room of some troubled child. As the play moves from scene to scene and the use of each child-like article is revealed, it becomes clear that we are actually in such a room, as the symptoms and effects of Landau-Kleffner Syndrome are revealed through the progression of the piece. LKS is a rare form of epilepsy that eventually steals away the comprehension of spoken language. Poole's young nephew fell victim to it. I knew nothing of if before I saw Murder, Hope, but I do now, and that is an effective and generous use of good art. A most impressive feat for a young artist, and worth your time to experience it.

If you saw this work, let us know below.