A Modicum of Freedom: a dystopic parable in need of polish 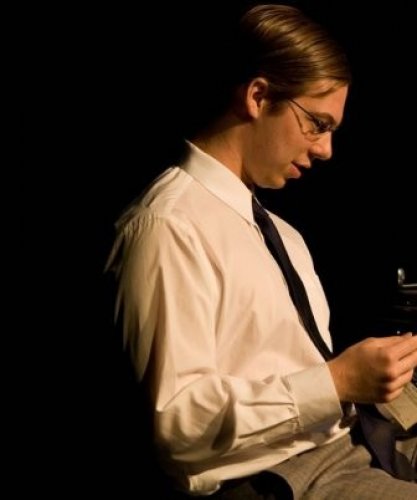 A Modicum of Freedom

Ryan M. Sero’s dystopic comedy A Modicum of Freedom (produced by make.art.theatre as part of SummerWorks) is set in an Orwellian future where the totalitarian government exerts complete control over the citizens. While the setting is far from original, the twist is new; the entire population is given day-to-day instructions on how to live their personal lives, as dictated by ministry-appointed writers and overseen by omnipresent security officers. Unfortunately this potential-heavy premise never quite manages to get off the ground, leaving the audience more preoccupied with imagining Sero’s world for themselves than attending the details put forth on stage.

Sero plays the likeable hero Herbert Q. Milk, one of the numerous writers who is himself dissatisfied with his ministry-assigned personality. He is teamed with a fastidious surveillance officer (Aaron Joel Craig) who sees terrorism everywhere, both of whom report to the smarmy propaganda-spewing Prime Minister Whelk (Craig Rintoul). Unfortunately the three male leads seemed to have a fair deal of trouble with their lines and pacing, tossing a jarring monkey wrench into the flow of the narrative. Kaitlyn McGee made a valiant effort to keep things on track with her performance as Herbert’s sympathetic wife, but to no avail.

Sero’s script strives for a perfunctory precision of rapid-fire lines that doesn’t quite materialize onstage, while a tedious ending leaves the entire story feeling a bit flat. When an administrative error gives Milk the opportunity to quite literally write his own destiny it sets the stage for a fresh take on common dystopic metaphors, but director Scott Fairley can’t seem to decide if he wants to play for social commentary or slapstick laughs. Not that the two need be mutually exclusive, but a fluid synthesis is at least required.

The entire show balanced on the cusp of being something wonderful, but was in need of a few more rounds of polishing to find an appropriate rhythm. While such elbow room tends to be given at the Fringe (where A Modicum of Freedom first debuted), SummerWorks performances should be set to a higher standard.

A Modicum of Freedom is on as part of this year's SummerWorks Festival. For more information go here.