Loving the Stranger or How to Recognize an Invert: less bite, more subtle 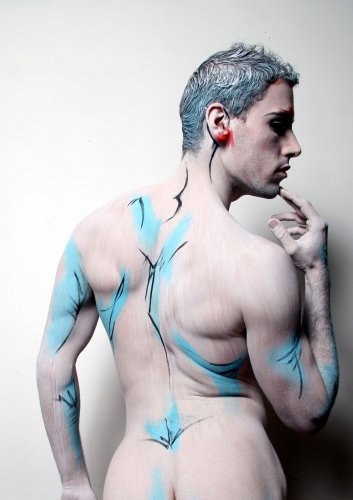 Director Alistair Newton and his company Ecce Homo have become Summerworks regulars, first bursting onto the scene with attention grabbing The Pastor Phelps Project, a delightful and scathing cabaret deconstruction of ultra-controversial (99% percent of people would say ultra-hateful) American religious leader Fred Phelps, and then a surprising if not unreasonable dissection of humanitarian icon Mother Teresa.

Loving the Stranger marks Newton’s third appearance at Summerworks, and although he has kept his trademark cabaret style, musical numbers, stark lighting, and pasty-faced actors donning crisp costumes and delivering over the top performances (most notably Seth Drabinsky and Matt Eger), he has shifted his focus from individuals as subjects to whole eras.

In this case Newton has created a collage of excerpts from texts and speeches from late 1800s to mid 1900's Germany on the topic of homosexuality from both medical and social perspectives. Loving the Stranger lacks much of the bite of Newton’s previous work, largely because the revelation that conservative mid-century Germany produced a great deal of negative misinformation about homosexuality (as did many other countries) is hardly surprising, nor does it have the same smack of contemporary relevance. Newton does reference some more recent examples of gay rights issues, such as California’s Proposition 8, but they take a backseat to the more vintage material and as such don’t receive the full brunt of his critical eye. Adding a subtle celebratory undertone are little revelations such as the fact that the first gay magazine was published in 1925 in Germany, and the touching if pragmatic recollections of gay artist and concentration camp survivor Peter Flinsch.

Loving the Stranger or How to Recognize an Invert may not be Ecce Homo’s strongest satirical work to date but it is the most subtle and offers a glimpse into some obscure and fascinating material.

Loving the Stranger or How to Recognize is on as part of this year's SummerWorks for more information go here.