Love, Loss and What I Wore: a perfect girls' night out 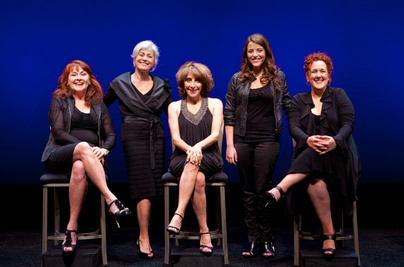 The gods of the chick flick, or whatever its stage equivalent may be, have smiled on Nora Ephron once again. She teamed up with fellow writer of many mediums, Delia Ephron, to create a five-woman stage show that has audiences laughing to their hearts’ content. The actors sit behind music stands, literally reading the stories of their lives. The stories represent all women’s lives, so an audience full of women on the night I attended welcomed them with open arms.

The stories of such items open the doors to universal women’s experiences. First times, first loves, divorces, deaths, everything we go through in a human life – the memories of everything are held in clothing. On opening night at Panasonic Theatre, Toronto’s audience reacted like New York’s: both men and women revelled in the palpable, relatable memory of women’s lives.

A stellar comedic cast brought life to the readings. The inimitable Andrea Martin brought in the loudest laughs, although she created lovely, touching moments, too. Mary Walsh brought her brash humour, Sharron Matthews a vulnerability that begs the audience’s compassion, and Paula Brancati provided the youthful enthusiasm to complete the mix. Louise Pitre united the wild energies onstage; her grounded openness corralled several star performances into a strong ensemble piece.

The play is about the most basic, universal experiences – and about memory. It’s funny, touching and accessible. It’s a blast to see these five women play off each other in a casual but close way, as they sit lined up across the stage. This Ephron creation is perfect for girls’ night out.

Love, Loss and What I Wore by Nora and Delia Ephron continues at the Panasonic Theatre in Toronto until August 7, 2010. For more information go here