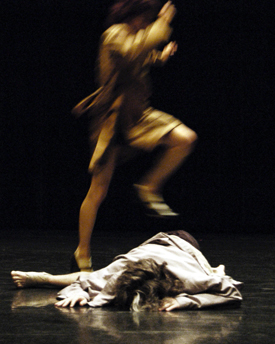 Entering the world of "Louise Bédard":http://www.lbdanse.org/ is a lot like wandering into a funhouse of the surreal. There is the sound of clocks ticking out of sync, dancers twitch and writhe as though overtaken by hallucinogenic drugs while being choreographed by a bossy robot.

A stuffed dinosaur appears on stage and one dancer produces a large teddy bear that becomes the object of her demented affection. All of this has the potential to nose dive straight to the place where obscure dance goes to die, yet *Enfin Vous Zestes* ( _Finally, You Are_ ) which was performed as part of this year’s "Vancouver International Dance Festival":http://www.vidf.ca/, was strangely appealing, its sense of the absurd winning me over with its tight execution and often hilarious interaction between the six dancers.

Near the beginning of this show, I wondered if I’d be fully absorbed. There is an aesthetic insistently composed of random pieces and a narrative that reveled in being non-linear. However, the cleverness was precisely that the piece managed to create a narrative of surreal hilarity out of several seemingly unrelated vignettes that managed to showcase the dancers’ technical strength as well as their ability to interpret choreography that seemed to be at once serious and making fun of serious choreography.

Each of the six dancers enter wearing an oversized raincoat that, throughout the performance, becomes a cave to hide in, a prop to be flung on the floor, and is at once mysterious and suggestive of a flasher about to show his goods. This possibility of transformation is paramount to Bédard’s work. She plays with our perceptions of all kinds of things: our perceptions of the stability of objects, our perceptions of human relations, our idea of narrative, and, indeed, our very conception of dance. And she does all of this with playfulness and humour that buoyed her dancers in their roughly hour and 15-minute romp around the performance space at the Roundhouse.

Although this was an ensemble piece in which each dancer had roughly equal skill and equal stage time, it was hard for me to keep my eyes off Sarah Williams. There is something about her facial expressions that nearly always suggests proximity to a fit of laughter. If there’s someone who knows how to take up the stage and also take the piss out of the seriousness of dance, it’s Williams. Her duet with the giant teddy bear both evoked and mocked tenderness, while her immersion into her raincoat turned her into some kind of bizarre, muppet-like creature that, without language, brought me to paroxysms of gut-clutching laughter.

I’m not entirely sure what the theme of this show was, and that could bother me; I’m sure in some cases it would, but I find myself, instead, amused by the unusual and refreshing approach of *Enfin Vous Zestes*. There were some elements of the staging that left me a bit confused such as the occasionally very abstract projections that took up the back wall of the stage or the endless costume changes but overall my attention was not overly taken up by these things. The music, which was performed live by Diane Labrosse, was highly abstract yet saliently captivating, and it inserted itself into the choreographic play of the dancers seamlessly. The lighting was clever and lent itself to occasional shadow play (a game of shadow puppets anyone?), and the décor pieces, which appeared to be large pieces of Japanese paper in multiple oversized wooden frames were interesting to look at and occasionally became part of the dance. The piece began to lose my attention a bit towards the end as it moved from humour to a more naturalistic seriousness, and I felt that it might have wrapped up sooner, still, I left the theatre happy to have seen such an original, creative and humorous exploration of art and the absurd and the role of dancers within this unusual fantasy world.

_Louise Bedard Danse performed March 12-14 at the Roundhouse as part of the Vancouver International Dance Festival. For more information have fun_ "here":http://www.vidf.ca/index.php?option=com_content&task=view&id=31&Itemid=26