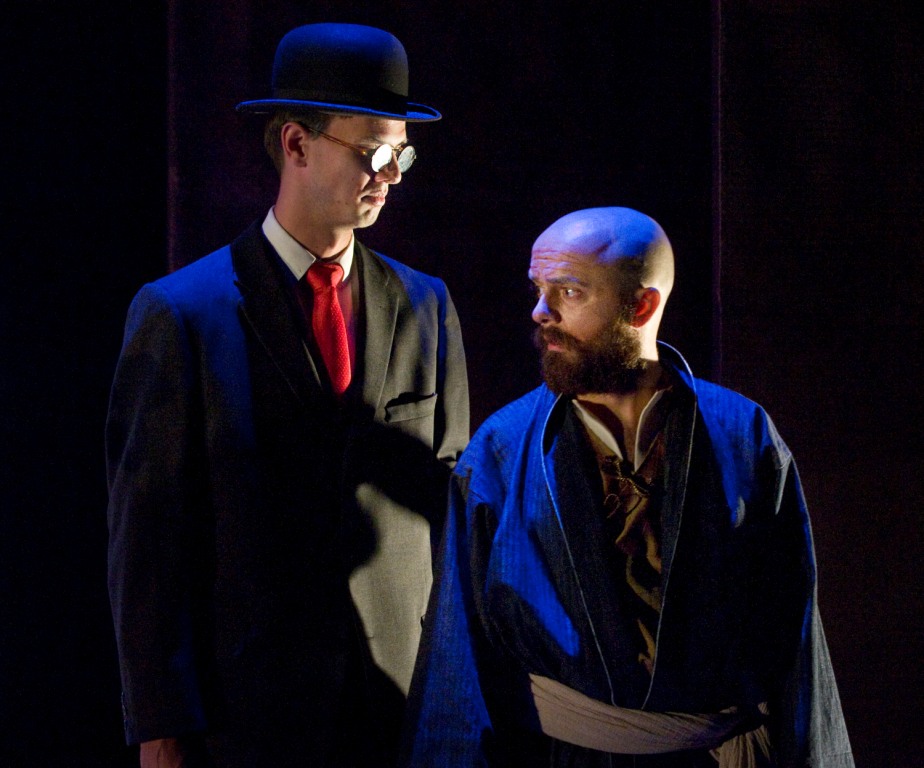 Productions at Langara College’s Studio 58 are one theatrical experience I’m always excited about. Although I’m not partial to biblical stories, Lot’s Wife, advertised as offering “new and unique perspectives of the story of Abraham”, intrigued me.

Prior to the performance, so that I would feel well acquainted with the biblical account, I read a number of versions of the Abraham story. He is credited as being the first to introduce the idea of monotheism, naturally a transformative event for the times. In the Playwrights Notes accompanying the production, we are informed that the story is based on the idea that the original author was from 920 BC and lived in the court of King Rehoboam. We are asked to wonder what it would be like if this was the first version of the Old Testament, based on stories and legends from that era. A compelling concept, except that I was not familiar with King Rehoboam.

Once I returned home, somewhat confused by the choices made, I researched King Rehoboam. I was amazed to find out that Rehoboam was a villainous leader who, according to biblical sources, can teach us much about how not to live. While the people at the time were fighting for their rights, Rehoboam was making it harder for them - working them harder, taxing them more.

Suddenly the perspective of the story unfolded for me. I could now see how clearly this version of the story would be appropriate for the times. King Rehoboam did not like the idea of God and he certainly did not want his people having any grand ideas about an almighty deity.  The scribe from the court of King Rehoboam recounts of a somewhat alien-like God – dressed in a modern black suit. God is portrayed as a rather quiet, non-communicative type, vague about the reasons for what he asks of Abraham. And Abraham, completely taken by God, listens and carries out all requests without question. All Abraham’s family members simply follow along.

Abraham, played by Byron Noble, perfectly portrayed that innocent naïve individual, entranced by this new God, who leads him on incredible and gruelling missions – traipsing around the desert for 40 years or requesting his son and other male family members to cut off their foreskins. Another character that entranced me was Michelle Johnson’s portrayal of a donkey – even her face took on the appearance of the animal. The modern language used in this piece generated a clear and humorous understanding of the story and although they were living 4000 years ago, it was possible to sympathize with the people for the hardships they went through.

Looking at the overall production, it was impressive and entertaining. The lighting was luminous, the creative placement of light and dark embellishing the mood of each scene. The staging enhanced elements of realism in a sparsely but effectively decorated set. Costumes of the time were well portrayed; the white tunics and luxurious wings of the angels particularly stunning. Working with such a large cast can be cumbersome but Tait handles it with flare - particularly memorable was the sand storm done in slow motion. What can I say about this talented cast? They put in their all; I could almost feel them oozing with being present in their roles.

This is a biblical story that possibly many are not familiar with. Abraham, who alone has access to God, is compelled to follow his word faithfully. God leads Abraham and his whole family through the desert for 40 years. They wander and wander. Finally, his exhausted cousin Lot becomes fed up with all the wandering and, taking his family with him, separates from the group and retires to the lovely town of Sodom. Abraham (along with his immediate family) continues to traipse along with the promise from God that his seed will spread to all of the lands.

Time progresses and God is not pleased with what’s taking place in Sodom (lots of nasty stuff like sex, especially homosexual sex) so he decides to destroy the hedonistic city (not a very nice thing to do). God grants Abraham’s request and allows Lot and his family (led by two beautiful male angels) to escape before the destruction takes place. Unfortunately Lot’s wife looks back while they are fleeing and God, without remorse, turns her into a pillar of salt.

Lot is devastated. Lot’s two daughters are convinced, along with their father, that they are the only three people left in the world, so they take it upon themselves to have sex with him. (Didn’t God realize this was going to happen?) Abraham’s wife, now in her 90’s, is finally granted the birth of a child…and so the population starts to grow.

I was left feeling sorry for Abraham, sorry for Lot, sorry for his wife, really sorry for Lot’s daughter, sorry for the whole city of Sodom. God – I had no sympathy for; what a mess he created! Possibly that is what King Rehoboam would want us to feel if we were living in year 920 BC. Being up on your biblical studies will help you to understand the significance of this approach; otherwise you can just sit back and enjoy a well orchestrated performance.