Lord of the Files 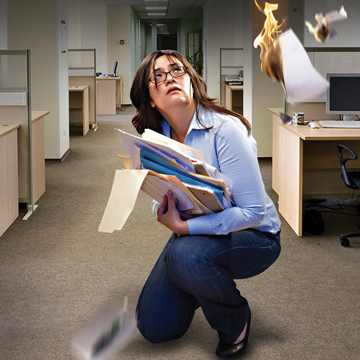 Ah, the artist’s ideal day job: well-paying, good title, solid corporation, some creativity involved…then the company sells out, and the layoffs hit. But they don’t hit like a punch, a sudden blow that leaves you dazed and disoriented -- they hit like one of those time-release breakups that burn slow and crazymaking like a slowly-peeled bandaid.

There is something about the story of Lord of the Files that rings so true, so close to the spinal cord of so many artists and art enthusiasts. The show has been packed-house since its opening, and despite the modest advertising I have seen for the event, it is easy to see why people are flocking to this understated wonder.

Lesley Tsina is a true introvert: softspoken and subdued in person, she blossoms onstage, delving deeply into the intricacies of workplace experience with the insight only one so observational and thoughtful can demonstrate.

Tsina provides an overview of what happens when a corporation is bought out by a competitor and its employees are forced to write off projects they’ve nearly completed in favour of ‘hanging tough’ in hopes of a significant severance cheque. What do dedicated employees do when they job they are so invested in comes to an end? Tsina’s talented and eloquent writing skills present to us not only an overview of gradual corporate disintegration into chaos, but also a succinct and quote-worthy examination of the social dynamics of a group of people hellbent on retaining their paycheques but ultimately doomed to unemployment.

“I have to do something. At this point, what else is there?”

Tsina summarizes her story as a tale of what people are willing to do when the work they have poured their soul into is coming to an end: they goof off, revisit office alliances, and make foolish choices.

Lord of the Files is presented as a documentation of  the experience of being written off by a heartless employer, but in presentation, it turns into a validation of how the individual responds to having one’s investment in a workload dismissed as superficial, to having one’s work-based social alliances change and flux in response to the financial tides. Our predecessors raised us on the myth of a permanent job-career, of something that was stable and meaningful. But Tsina blows this idea out of the water.

“You have to be willing to kill yourself on (writing) a document that no one will ever read or even knows exists.”

Tsina explores the ridiculous futility of companies facing impending closure -- from the persistent usage of meaningless industry jargon such as “productize”, to Human Resource’s enthusiasm for pointless team-building exercises such as office holiday decorating contests or stilted pseudo-social events. And what, pray tell, is the point of taking a staff photo during the last half hour before the company shuts down permanently?

“When things are shitty, we need someone who cares so little that he’s willing to be the asshole.”

For those who empathize with such characters as the lead persona(s) in Fight Club or Waiting, Lord of the Files will ring true as a tale of frustrated ambition, pointless pursuits, and blind devotion. But for those who have never suffered the titles of “assistant” or “associate” in their lives, this story will leave a strange question of misguided dedication. The answer, it seems, lies buried in this modern retelling of Marxist social philosophy.

Lord of the Files is raw, true, and real. Tsina solidly maintains the stoic demeanor of one who has served many years of dealing with cubicle mates or customers -- but beneath her surface is a sharp-tongued snake, eager to reveal or pry at the cracks in the corporate structure and revel in the disintegration of all we have counted on as secure and reliable.