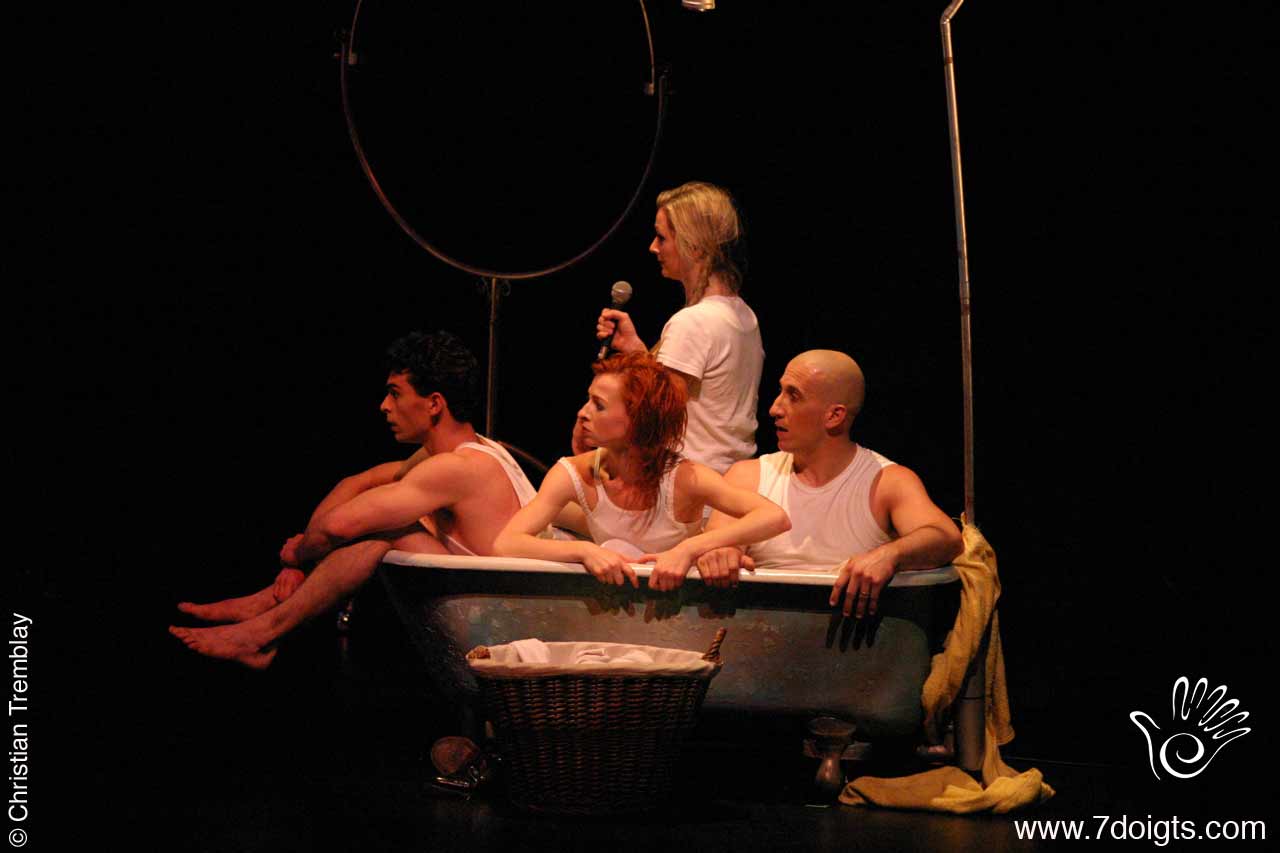 In a Montreal-style apartment, a fridge door sunk inside a cityscape wall of tin cans separates reality from fiction. It is through this divider that the audience enters the theatre.

We are the guests of the performers, they serve us, they tease us, they throw grapes at us, and then the show begins. Faon Shane, a sultry redhead, lures an audience member with an apple. Will he take it? Of course – with ready ease. “Men. They never learn.”

Coquettishly she turns back to her roommates as a fight over the apple turns into a dance with a tablecloth 30 feet in the air. From here the stories of each roommate unravels one by one into a quest for solitude, a need for love, Laurel and Hardy-like comedic bickering. Above all this, we are given a multi-media surreal commentary. A man jostles about the stage recording everything through live-feed to a screen overhead, though we soon realize that what is happening on the screen is not necessarily what is happening on stage. In a fight scene between Francois Isabelle and Sebastien Soldevila, the screen shows their every ninja-like move. Suddenly, Francois is fighting with himself, but on the screen his moves are echoed with all of his roommates.

So now, just when you thought you only had seven characters and a DJ to watch, you’ve also got a whole new world above the stage. It’s a true symphony for the eyes.
With above-air dances with chains, pendulum hoops and ribbons, followed by clowning, juggling, and Patrick Leonard throwing a didgeridoo up into the air, catching it on his mouth and starting to play - there is no doubt that you’re at the circus. Even the bedroom area is decorated in rich burgundy big-top stripes. But are you still watching a play?

Where The Seven Fingers fall short is in creating a story. Having seen a few circus-shows this year, the dividing line between good and great seems to involve having a plot line that draws you in just that little bit further. It’s the difference between watching “Karate Kid” when you’re seven or going down and checking out your local dojo. One makes you beg your folks for lessons, and the other makes you happy that there are people out there who can do that sort of stuff.

That said, the characters have a sexy charisma that keeps you rapt in their world. The music ranges from tribal to gypsy-like, with the talented DJ Pocket keeping us in sync with the action. Though everyone is in white undies, there is a colourful cabaret feel to the whole event.

The circus traditions hold strong on the stage, with the women playing the submissives - tied, coiled and contorted above air, and the men playing the strongman and the fool. Leonard does an amazing job with his buffoonery, giving us some good old slapstick comic relief whenever the girls get too tied-up. This is all bounced off of Soldevila, an excellent straight man, given both his intimidating size and his sardonic expressions.

Marjorie Nantel, the cute Liza Minelli of the cast, has a toying edge to her sexuality, which balanced well with Shane’s soft lustiness. While most characters seemed to have a reason, Francois Isabelle seemed to be an afterthought. He’s the moody roommate who gives a terrible poetry recital (intentionally bad) and then has a break-dance routine which, compared to everything else we see, is lacking in intensity. Or maybe the incredible skill in all of the other acts simply had me spoiled by the time they threw him in the spotlight.

Like the proverbial parade, everyone loves a circus, and while there are still some subtle improvements to be made, I would see the show again in a heartbeat.