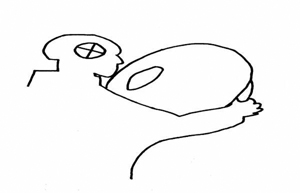 The Lesson is Airbag Production's debut production, and it's a bold choice, especially considering they've decided to Fringe it. Going traditional and cerebral here brings with it the risk of seeming  musty and institutional, and staying far away from the radar of the throngs of young theatre-goers lining up for Red Bastards and Cockwhisperers.

But if done well, it also carries the opportunity of seeing the kind of material that's made it into the realm of theatrical greatness for a reason, plays that may not get another chance to be put in front of the eyes of these audiences any other time of the year. And Airbag does it very well.

In truth, Eugène Ionesco's avant-garde one-act would have been a perfect fit for the Fringe, if such a thing had existed when it premièred in 1951. It's a sterling sample of the movement dubbed by critic Martin Esslin as the “Theatre of the Absurd”, which basically threw out all the musty and institutional constraints of the time and championed experimentation and weirdness. Ionesco, together with his contemporaries like Sams Beckett and Shepard, Tom Stoppard and Ed Albee, was working hard to establish the same spirit in the theatre that the Fringe inspires today. But these guys were much more enamoured with verbal gymnastics than most of today's playwright's, and The Lesson will prove it to you.

This is a hard play to pull off well. You need actors that can handle complicated language at a sustained level of agitation, and you need a director that can keep things clipping along at a mad pace and still somehow make us understand a story that's being told obliquely. And Airbag nails it. Their version of this play takes us on a steadily intensifying emotional ride that builds to a level of creepiness worthy of a good horror movie, and you have no idea how you got there. And they show us how to do it using only words as a weapon, a blunt instrument capable of reducing your opponent to a powerless and useless infant. And it's simply a play about a student meeting with his teacher.

In a very Fringe-worthy decision, this production plays with the relationships of the main characters by reversing the actors – Josh Hallem and Sive O'Neill - in their roles on alternating nights. The show I saw featured a female Professor and a male student, opposite to the playwright's original casting (you can read the Plank review of the alternate version here.) I guess one would have to see both versions to take advantage of the company's exploration of how changing the character's sex alters the power relationship of the piece, which is actually a pretty crafty way of selling a show twice. And I'm giving serious thought to checking out the other version.

If you saw this show and would like to comment, why not make use of the handy box below?