Legion Blues: Sins of our fathers 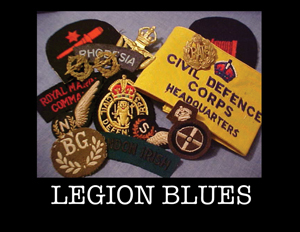 “War is hell” is always a trusty ignition phrase when concepting a story line. Legion Blues is an exploration of the effect of a tour of duty on two buddies as they try to adapt to life post-WWII, and the woman that comes between them.

Paul is steadily becoming a dead-beat dad and husband, spending as much time as possible shooting stick and swilling beers down at the local legion, and Ray, the determined bachelor, has seen too many people he cared about face down on the battlefield to ever allow himself to give a shit about anyone, ever again. A sure-fire recipe for dramatic tension if ever there was one.

The story line itself is constructed as a pretty clean and straight-forward drama. The two male characters never stray very far from their established stereotypes, but Legion Blues is at heart a woman's piece, and the third character of the three-hander, Paul's pre-liberation housewife Helen, does a wonderful job of portraying the journey to the breaking point of devotion and fidelity. Playwright Michael Beamish does a deft job of keeping Helen from what could easily have been a sentimentalized character; as the plot unfolds, her own weaknesses start to show through the cracks of her sunny “everything's okey-dokey” exterior. Together with a committed performance from the delightful actor playing Helen (again, no credit offered, I really wish more Fringe shows had programs), this really brings the play to life.

I felt a little cheated by the script itself at a few points, while it makes good use of overlapping scenes and dialogue to effectively build tension, the rising action will occasionally and inexplicably halt as the characters begin to narrate what's next instead of following through with it. This is especially frustrating when things start to get hot, the work could easily get drippingly sexy if the characters were allowed to show instead of tell. It was quite apparent the actors were more than willing to go there.

It's a bit of a green script by a young company, but perfectly suited to the Fringe circuit. And it's couched in a wonderfully Canadian atmosphere that made me feel like I was watching the grown-ups on my childhood street as the young people we never knew, with all their dirty laundry hanging out. Legion Blues is certainly worth a look.

Did you see this show? Let us know your thoughts?