The Journey Is Not Done Quickly: ennui….! 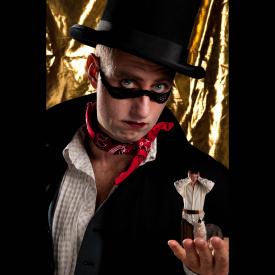 The Journey is almost done.

Midnight Hotel Productions is a new company out of NYC that has decided to bring their above mentioned show to not only the Victoria Fringe, but Vancouver as well. Good for them: get out, see the west coast, “go kayaking with the orcas”, have fun.

And kudos for spending the time to develop this show at an artists’ residency in the Adirondacks. Looks positively stunning and inspiring (the retreat that is…)

Kenneth Lang is the man who spent time there creating a character he describes “as a cross between Willy Wonka and a Russian Brothers Grimm” to be the narrator of this play (he is also ‘the Grey Wolf’…shhh don’t tell anyone). Now I love the Grimms and I also have effection for WW, but I’d say about the only thing he’s got in common with them is a white shirt and a top hat. Seriously, besides the fact that the wolf kills the young kid (yes I spoiled it for you) and he dresses funny like, WHERE is the similarity?

In the opening moments we are treated to an improvised movement piece by dancer Sara Edwards. Alone in a cell of light she personifies the young (male) Tsarovich’s loneliness and boredom. We understand his longing to escape the confines, established by his father’s decree, and to get out and discover the world.

Then the lights go black and out comes our narrator. After this point, the play has only two moments that were not excruciating: a wonderful movement piece where the wolf takes the young Tsarovich on a journey and the final curtain.

Lang promises that all our questions will be answered, that all will be revealed. Unfortunately, all that was revealed is the need for some direction. His narrator had all the presence of Ferris Beuller’s homeroom teacher with none of the humour. The choppy sound-scape contained some beautiful songs that cut in and out (not the greatest tech in the festival) but also served to completely disjoint the viewer. Perhaps employing an actual sound designer would be a good idea.

Every time he changes from the narrator to the wolf, Lang feels compelled to leave the stage to don the mask. Why bother? We know it’s you! You could save a hell of a lot of time and keep the flow moving if you found a way to do it in front of us (again, get a director).

This show would have offered us some great little dance moments if Lang could keep up with his young co-star and not have gotten sloppier as the piece went on. At the end, Lang promises us, again, that all will be revealed. I still am not sure what he meant by this; unless of course it is that his lack of ability and presence will become obvious. In this he succeeds.

Congrats on touring your show. Next time, work it a little more before you bring it out of the family basement.

Did you see this show? Do you agree with Franklin? Tell us below.