The Inventor of All Things - Rolls Goes Nuclear 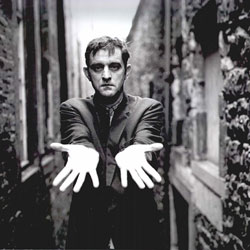 From the moment Jem Rolls steps onstage, the audience is bombarded by information. Facts. Anecdotes. Creative interpretations and rephrasings. I was stunned into inaction for a few minutes before finally remembering that I was writing a review and that this would be worth writing down.

He tells the story of Leo Szilard, a physicist of the early twentieth century whom he asserts was the first to conceive of nuclear fission. Brilliant, abrasive, and inexhaustible, he built a circle of key friends in physics simply by introducing himself to anyone he thought important enough to talk to. Instrumental at the earliest stages of nuclear weapon research, he did more than perhaps anyone else to shepherd the world away from the use of this technology.

Said he:  “I should be awarded the Nobel Prize for not inventing the atomic bomb in the 1920s.” But Szilard won no Prize; his reputation was buried by anti-Semitic and militaristic opponents. Rolls sets out to rehabilitate him and demonstrate his important role in the history of physics and of the world.

The Inventor of All Things is a creative biography. Rolls is candid about his process onstage. He tells you what to expect, down to the significance of certain light changes. He likes to poke fun at his show's resemblance to a lecture, as when he pauses in the middle of a sentence as if waiting for the audience to complete it: “…In the 1920s, Einstein and Szilard were working tirelessly on a ”— (pregnant pause)—“fridge.”

Rolls is more like a nuclear reactor than a nuclear bomb: you watch his power slowly build and then sustain itself all the way to the end of a fifty-minute performance that makes one wonder how so much energy can fit into such a tiny space. His seemingly inexhaustible charisma can't help but invite comparison with the subject of his show, the monomaniacal dynamo of intellect who rubbed shoulders with Fermi, Bohr, and Einstein. “I don't remember him ever sitting down,” Rolls quotes. “If I wanted to talk to him I had to wait until he paused for breath.” I can sympathize.

This show presents a fascinating tale with inexhaustible charm and enthusiasm. It's hard to imagine anyone attending it without learning something new. There's never a dull moment—no time for one. I'd recommend The Inventor of All Things to anyone who's interested in learning about some amazing history in a way they're not likely to forget.